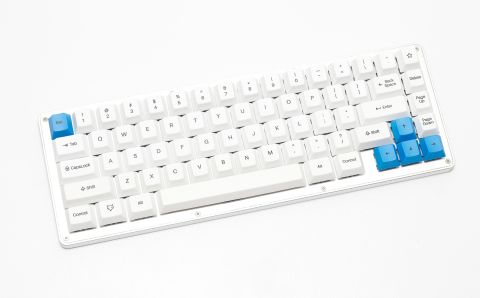 The rare WhiteFox is not for everyone, but its customizability and prestige can be extremely attractive to enthusiasts and collectors.

The WhiteFox has a special pedigree. It’s the first board we’ve reviewed that’s custom designed by the vibrant mechanical keyboard community. The vanguard of the project, Matteo Spinelli, (better known as Matt3o), spent an entire year perfecting its every aspect. With the help of the users at GeekHack, Input Club, and many others, he was able to realize his dream.

Matt3o’s WhiteFox is not aimed towards gamers, but rather the uber keyboard enthusiasts known for their relentless pursuit of quality. To meet their standards, the WhiteFox uses a solid aluminum casing and backplate. Its white PCB is custom made and painted by the community at Input Club. White backlights help brighten up the matte aluminum finish.

The WhiteFox is a 65% keyboard, meaning that it shaves off some keys to be more compact. By eliminating the number pad and the function row, the WhiteFox can fit virtually anywhere. But how do you access the function row? That’s where function layers come in.

As its name suggests, function layer allows a key to perform an alternate function by switching to another “layer”. Up to eight layers can be programmed for a single keyboard, but each layer needs a dedicated key for switching. The drawback of this system is obvious: the more layers you have, the more keys you’ll have to give up. With that said, we can’t see any practical user needing more than two function layers.

Programming the WhiteFox can be vexing at first. You’ll need to visit the WhiteFox Configurator web app to customize its layouts. The layout is then downloaded as a file and flashed onto your keyboard using the Kiibohd DFU Flashing Utility. The layout is stored in the keyboard, so you won’t need to do it again when you plug it into another PC. While this process is a bit more convoluted than a GUI-based driver software, it also introduces the freedom of sharing your profiles with other users.

Another new feature with the WhiteFox is its ability to change the layout of its keys. Different layouts have different arrangements for keys like Enter, Space bar, and Backspace. You can map the keys yourself, or use one of the five premade layouts offered by the Input Club. The WhiteFox ships with the funky True Fox layout by default.

The chassis can be easily opened and tinkered with. In fact, you can purchase the WhiteFox as an assembly kit and put it together yourself. There are plenty of materials to guide you through the process. For those itching to put their soldering gun to work, we urge you to grab the DIY kit-it’s a ton of fun.

If you choose to have your WhiteFox pre-assembled, you’ll get to pick between Cherry MX and Gateron switches. If you choose the DIY path, however, you’ll have the additional option of selecting the ultra-smooth Zealios switch. Our pre-assembled model came with the Gateron Brown switch, a fierce Cherry MX competitor.

Typing on the White Fox is absolute bliss. Compared to Cherry MX Brown, the Gateron Brown has a lighter peak force (50g vs 55g) and a less pronounced tactile point. Its reset point is also much closer to the actuation point. These two qualities make the Gateron Brown feel smoother and faster to reset than its Cherry MX counterpart.

The switch is only half the story. The WhiteFox’s keycaps are made from PBT plastic-a more rigid and durable material than ABS. PBT keycaps also lower the pitch of the keystrokes, making the clacking not as ear piercing. The keycaps are married with superb dye-sublimated key prints, where the ink is infused into the plastic. The blue-on-white Arctic color scheme is pleasant as well.

Though its performance is sublime, the WhiteFox is just too simplistic to be an acceptable gaming keyboard. The lack of an easily accessible function row and macros makes it a poor choice for MMOs and RTS. Dedicated media controls and USB pass throughs are missing as well. On the plus side, the keyboard does come with a fantastic braided USB cable and spare keycaps for different layouts.

The WhiteFox’s prestige is only superseded by its rarity. Currently, it’s only available on Massdrop, an online store where a product is only manufactured when it’s requested by enough users. It’s expensive, too. The last time it was sold, the WhiteFox was priced at around $179 for the DIY kit and a whopping $200 for the assembled board. If you’re looking to score one second hand, forget it. Only two batches were ever produced: one in December 2015 and another in July 2016.

Standing at the apex of typing luxury, the WhiteFox is to keyboards as Hendrix is to guitarists. But like any luxury, its full value can only be appreciated by those experienced in the field. It’s a quality instrument that’s guaranteed to satisfy those who understand its appeal-provided that they have the patience to wait for its arrival.

The rare WhiteFox is not for everyone, but its customizability and prestige can be extremely attractive to enthusiasts and collectors.