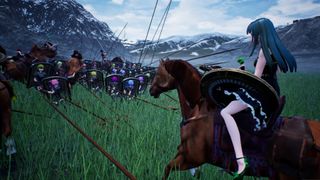 Christopher Livingston played Hand Simulator, a survival game that models every twist of your wrist. If you can successfully pick up a rock or a stick you're doing well, and if you can crack open a coconut or a snake then you're some kind of hero. He's also been playing Girls' Civilization, a Mount & Blade knock-off in Early Access where every character is an anime lady in tiny pants. Remember when this kind of thing being on Steam seemed odd?

Andy Kelly has been playing Soviet truck sim Spintires, exploring the new Chernobyl DLC, which means driving around Pripyat pretending this is "STALKER with trucks". Only with a lot more winching to get yourself out of difficult terrain. Probably about the same amount of radiation, though.

Phil Savage has been playing Untitled Goose Game and appreciating its authentic recreation of an English village, and how awful it is—presumably because it's full of English people. Which is why it's so much fun to ruin their everything as the Chaos Goose, Lord of Misrule, honking dark energy into their miserable lives. All hail the Chaos Goose.

Joseph Knoop has had a chance to play Zombie Army 4: Dead War early. He's finding that it embraces the absurdism of sniping Nazi zombies even more than the previous games in the series, with added gore in those slow-motion x-ray shots of dead organs being punctured and limbs blown off. Sounds like a jolly good time.

I've been playing The Shrouded Isle, a management sim about every child's dream—running your own cult. It's mostly text, numbers, and decisions. Each spooky family in the community wants you to rely on their advice, but it's impossible to please everyone, and some of them have secret vices that undercut your ability to balance stats like ignorance and fervor. Oh yeah, and you have to sacrifice one of them to Chernobog every season. When you get it wrong and the town rebels or turns away from darkness you start over, but I feel like I'm learning something new about how to keep the economics of this apocalyptic cult going each time.

What about you? Have you gone back to Monster Hunter World to try out the Iceborne expansion? Have you been playing GTFO or CS:GO or something else with a four-letter abbreviation? Let us know!