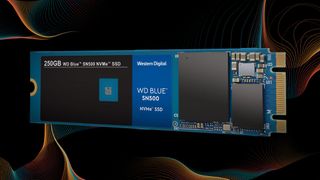 Just two months after revealing the high-performance WD Black SN750,  which immediately scored a spot on our best SSDs for gaming roundup and on our list of the best NVMe SSDs, Western Digital is seemingly hot on the heels of another breakthrough. Launched this morning, the WD Blue SN500 is less about record-smashing transfer speeds and more focused on value—delivering NVMe speeds for little more than the cost of a SATA solid-state drive.

The WD Blue series drives were historically constrained to the slower SATA interface, available in M.2 and 2.5-inch flavors. But now there's a nimbler option being sold in both 250GB and 500GB capacities. Priced at $54.99 and $77.99, respectively, Western Digital promises sequential read speeds of up to 1,700MB/s and sequential write speeds of up to 1,450MB/s.

Compared to the company's top-end WD Black, which blew me away with 3,419MB/s and 2,992MB/s read/write speeds in my own testing, these figures aren't exactly impressive until you consider the savings. Whereas the SN750 costs $129.99 for 500GB of storage, the WD Blue SN500 costs around 40 percent less. It's also a huge step up from the claimed 560MB/s and 530MB/s read/write rates of the $72.99 SATA III WD Blue, yet it'll only set you back a mere five bucks more.

Needless to say, there's a strong case to be made for the WD Blue SN500. Cheaper storage options are always welcome, even if they're often compromised solutions. Whether or not real-world testing data reflects company claims remains to be seen. Stay tuned to PC Gamer for our inevitable in-depth impressions.