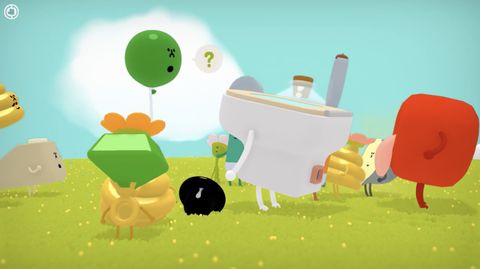 Wattam is a fun colourful playground for players to goof around in, even though it's controls have a few screws loose.

What is it? A fun adventure where you control a host of cute, sentient objects
Expect to pay $19 / £14
Developer Funomena
Publisher Annapurna Interactive
Multiplayer? No
Link Official site

When Katamari released back in 2004 it surprised players and critics with its playful mechanics, chaotic fun, and a soundtrack that has since embedded itself in the brains of all who played it. It was an energetic and colourful bolt from the blue. It's creator, Keita Takahashi, was launched into the games industry spotlight and, alongside his game Noby Noby Boy, became known for his imagination and surreal humour. Although both Katami and Noby Noby Boy released over a decade ago, Takahashi's next game, Wattam, has the same free-spirited and playful sense of fun.

In Wattam you play as the Mayor, a green cube wearing a black bowler hat who sports a dapper moustache. But as happy as a fancy bowler hat and a moustache would make me, the Mayor in Wattam is far from happy. At the beginning of the game, he is the sole character in a dark and empty world. But then a tiny pebble named David appears and the two make quick friends. As the two are playing tag a rock named Robert spurts from the ground and joins in the fun. More and more objects keep arriving and, before you know it, the world of Wattam is thriving with loads of cute, everyday objects.

As each character joins the ever-growing community, you have the ability to control whoever you like, from Michelle the small but spritely acorn, to a giant table called Malcolm. Some of Wattam's characters are blessed with special abilities. For example, if you control the onion you'll make characters cry as you run past them, or you have the ability to grab and flush characters if you play as the toilet. You can play as a huge tree that sucks characters into its mouth and then they grow back as fruit. That's one of the weirder ones.

Even if a character doesn't have a special ability, everyone has the option of using the Q and E keys to hold hands with anyone and the ability to climb. When you're busy controlling one character, the others just goof around. They climb on top of each other, hang out in groups, and aimlessly run around. It's like watching a group of toddlers and super adorable—apart from Kyle, the huge gaping mouth with its tongue hanging out that chases after the food characters, he needs to chill out. Chill out, Kyle.

The mayor has the best ability, though. Hidden underneath that shiny bowler hat is a special surprise—it's a bomb! This is a game by Takahashi here, so it's a fun bomb. Characters explode into the sky with a burst of colour and confetti and land in a fit of delightful giggles. After your vibrant display, they'll actively run up to you shouting "Kaboom!" demanding to be launched sky high once again.

Takahashi has created this bonkers box of fun objects to play with, but there's also a story. The Mayor and all the characters of this world have forgotten why they were all separated from each other in the first place, and this reason slowly reveals itself as more objects return to join in the fun.

This story pops its head in a couple of times and wraps up nicely in the finale, but your main activity revolves around helping characters solve their problems. These storylines are a little less post-apocalyptic and more Saturday morning cartoon. They rarely last over ten minutes and focus on topics like helping Deborah the balloon overcome her fear of heights or helping a telephone find it's lost receiver. Its stories are fun and childlike. The main purpose of the game is simply to make friends and have fun, which I think is lovely but will, no doubt, not be for everyone.

I did run into a few hitches. The controls on PC can be a bit finicky, and I had a constant battle with the camera controls in particular. Trying to hold down the right mouse button and move it smoothly without it getting caught on characters or moving off my mouse mat was a struggle. In the (very few) moments where I had to move it quickly, moving the camera became frustrating. The one mechanic that I thought would be a nightmare is the climbing, but all the characters I controlled had no problem flinging themselves at an obstacle and ascending to great heights while I pressed the up key.

When creating Katamari, Takahashi said in an interview that he wanted to capture the fun of when a child rolls a ball. With Wattam, it's like an open toy box. You gather all the fruit together and have them form a single giant tower or you could go nick the Mayor's hat and make a toilet wear it instead. When a new character is introduced you want to play with it immediately.

What does the desk fan character do? It creates a gust of air, that's kinda neat, now I want to run around knocking over all the other characters with my powerful wind powers. It's the same feeling of when you first honk in Untitled Goose Game, it's finding the fun in silliness. With Wattam, Takahashi has proven that he still places fun above all else, and even after a decade, it's still a refreshing perspective.

Wattam is a fun colourful playground for players to goof around in, even though it's controls have a few screws loose.