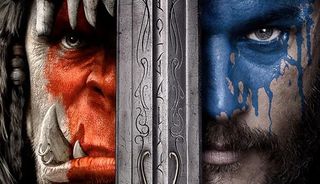 Today on I'm Surprised This Didn't Happen Sooner, YouTuber Robert Mermet did the inevitable, and dubbed the Warcraft movie trailer with sound effects and music from one of its progenitors, Warcraft II. Hit the play button for a high fidelity tour of Azeroth, narrated by plenty of orcish 'Ugg-uggs' and proclamations that, indeed, the town is under attack.

It's good fun and and a startling reminder of the difference in tech (and creative direction) between now and 1995. Warcraft II's griffin cry is nails on a chalkboard and the froggy VO is hilariously dated, but that music—phew, it still has power. Certainly takes me back. Okay, perhaps not suited for a multi-million dollar blockbuster, but still... What was once a hokey pixelated fantasy universe might be the next major cinematic fantasy franchise. Blizzard is all grown up now. And rich. So, so rich.