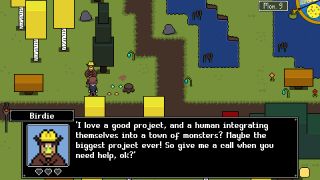 Charmingly lo-fi village life game about outcasts and weirdos in a literally broken world? That’s what Village Monsters is. It's a low-key village life game, the kind where you go fishing and plant gardens and make your house nice. You also get to know the "dozens" of monster neighbors, learning their stories and likes and dislikes. The game also has a quirky angle—it is, in and of itself, set inside a forgotten videogame. You can apparently abuse the glitches in the game world to boost your own powers and fix things up. Finally, perhaps most mysteriously, there’s a lot of emphasis on the simulation of the world itself, with “shifting weather patterns, sweeping seasonal changes, and interesting system interactions” as well as emphasis on exploring places outside the monster village. I’ve not played it, but I can’t help but be charmed—many of the few reviews and comments are quite positive. I’ll definitely check it out.

Village Monsters is a single-person project by developer Josh Bossie. It was funded via a modest Kickstarter campaign a few years ago and has been in development ever since, just branching out to major platforms last November. It’s in Early Access development, and receiving regular updates as of this article’s writing. You can check it out (and buy it) on Steam, Itch.io, and GameJolt.