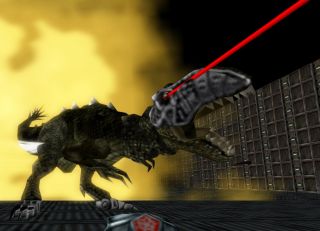 Rumors of a Turok remake first bubbled up in May, when Samuel Villarreal told TechRaptor that Night Dive Studios had picked up the rights to the game. Today, Night Dive confirmed it: Turok: Dinosaur Hunter and its sequel, Turok 2: Seeds of Evil, are being updated for re-release on modern PCs.

"When Turok: Dinosaur Hunter was first released it was nothing short of revolutionary. To that point, no game had ever offered the combination of graphics and an open world environment that Turok featured," Night Dive CEO Stephen Kick said. "We are very excited to have the opportunity to bring this great franchise back to life and to be able to share these great titles with today’s gaming audience."

Night Dive has updated a number of old classics for digital platforms, including I Have No Mouth and I Must Scream and Strife, but it's probably best known for making the long-awaited re-release of System Shock 2 finally happen. It was also in talks to re-launch the great No One Lives Forever, which would have been fantastic, but that deal ultimately fell through.

There's no release date on the Turoks at this point, although a rep said the studio is aiming to have them out by the end of the year. For now—and bearing in mind that Turok came out in 1997, and Turok 2 in 1999, and that this is a remaster and not a remake, which is maybe a fine hair to split but you know what I'm getting at—enjoy some screens.