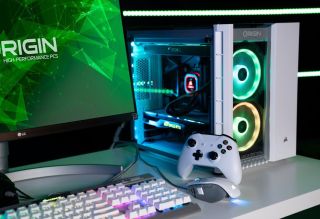 A few months ago, Origin PC celebrated its 10th anniversary in the boutique building space with the Big O,  a custom desktop with both PC and console hardware underneath the hood. It was supposed to be just a one-off build, but Origin PC has decided to build the Big O for the masses.

Technically, this is third iteration of the hybrid gaming PC. Origin PC built a version infused with an Xbox 360 several years ago, then the more recent updated model, and now a version that any gamer with the requisite coin can order.

What's available to buy is a little bit different than the celebratory build Origin PC showed off a few months. Whereas the boutique builder crammed a PlayStation 4 Pro, Xbox One X, and Nintendo Switch into that system, gamers who order a Big O will have to settle for just one console, either a PS4 Pro or Xbox One S All-Digital Edition.

It's a little disappointing that an Xbox One X is not an option, as it's notably more powerful than the Xbox One S and supports gaming at 4K. On the bright side, configuring the Big O with an Xbox One S is a little cheaper than outfitting it with a PS4 Pro (starting at $2,427 versus $2,573).

A baseline configuration gets you the following components on the PC side:

Just about everything can be upgraded on the configuration page, including up to an Intel Core i9-9900K or AMD Ryzen 9 3950X processor, up to 64GB of RAM, and up to a GeForce RTX 2080 Ti or RTX Titan graphics card, to give some examples. More robust liquid cooling options are available as well. Of course, these upgrades also jack up the price, which is already fairly steep.

All of this comes wrapped in a modified Corsair Crystal 280X case. Part of the reason Origin PC opted for this particular chassis is because of its dual chamber design. This allows the company to tuck the console into the right-side chamber. Have a look:

What Origin PC is basically doing is gutting PS4 Pro and Xbox One S consoles and injecting the main components inside the Big O. In other words, you're not getting the console chassis, or in the case of the PS4 Pro, a disc drive (the Xbox One S All-Digital Edition doesn't have a disc drive to begin with).

Like the PC portion of the build, the console is liquid cooled. The right-side of the case is also where an optional Elgato 4K60 Pro capture card resides.

That latter bit is an interesting scenario, albeit a niche one. However, a system like this is one way of being primarily a PC gamer while not missing out on certain PS4 or Xbox exclusives, depending on which way you go. The other way is to just buy or build a PC and purchase a console separately, but for those who want a sort of all-in-one configuration, here you go.

The Big O is available now.