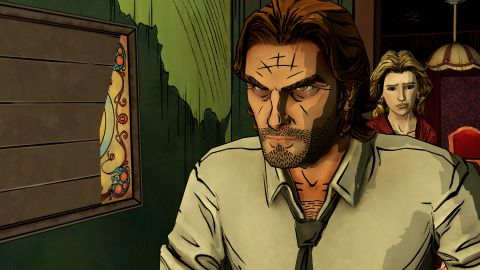 A great comeback from episode two, A Crooked Mile amplifies the dramathough sometimes in the wrong waysand confronts Bigby with hard choices and proper detective work.

This review references the events of episodes one and two. I've been careful not to reveal any major plot points from episode three, but some details may be inferred.

Most game characters are vessels for the player to pour input into, but Telltale is at its finest when it reaches out and pours its characters' dilemmas back into us. In my favorite moments of its branching stories, the protagonist's conflicting motives become my conflicting motives—I don't enter the correct input to decide what happens next, I struggle to do what's right and live with the fallout. After a disappointing second episode , The Wolf Among Us nails this design in the third.

A Crooked Mile continues an investigation into the murders of two prostitutes in the weird noir world of the Fables comics. The violent but semi-reformed Bigby (a.k.a. The Big Bad Wolf) is the sheriff of Fabletown, a magically disguised New York City ghetto where fairytale characters live in exile. Few trust him, and if he has good intentions, they're masked by his reputation as an incompetent bully.

The episodes play out in scenes—sometimes fully staged, other times with a little strolling around—which branch as you examine clues and select Bigby's dialog in conversations and confrontations. Occasional combat generates the least appealing moments, where you're prompted to enter the correct input (press this to dodge, click here to throw a dumpster at someone), and are then asked for a big binary decision: keep beating this poor sap or back away? I'm pleased that episode three uses combat sparingly and to better effect than in previous episodes.

A Crooked Mile is less about wrestling with Bigby's violent rage, and more about how he indirectly hurts others. He's caught between revenge and justice, integrity and the barrel of a gun—where episode two tested Bigby's predisposition for violence with what felt like minor decisions, Episode Three opens with a tense stand-off. Rather than a binary “who gets hurt” decision, it cleverly pits his integrity as sheriff against his responsibility to protect, and sets up the episode's central conflict between due process and a witch hunt. (Cheekily, the main investigation is a literal witch hunt, which I found a bit too direct.)

I'm glad that I'm not sure what would have happened if I'd made different decisions. Foresight into consequences replaces the struggle to do what's right, and makes the decision about where I want the story to go instead of how I want the character to act. You can rewind to change your decisions in important scenes, but I don't recommend it. You'll discover that certain events are inevitable, which breaks the illusion that every path has a branch. I would feel cheated by the deception, but The Wolf Among Us does such a good job of maintaining its illusion that poking around in its logic feels more like revealing a magician's tricks. Ruining the mystery doesn't make it more fun.

From there, A Crooked Mile becomes one of the best expressions of Telltale's consequence engine yet. The first episode included a pivotal two-way decision (something that also felt missing in the second episode), but Episode Three outdoes it with a decision among three locations, kicking off a timed investigation which actually feels like an investigation . Where we previously poked at clues and interrogated suspects until Bigby put things together, here I was pressured to put it together myself or risk an undesirable outcome. The order in which I chose to visit the three locations mattered, and I was asked to make smart decisions about which clues I examined in each scene.

Though I botched some parts of the investigation, I never hit a fail state. Instead, The Wolf Among Us adapted the story to my decisions, and that's great. Telltale further rejects traditional action and adventure game design to replace "you died, do it over" with "you messed up, deal with it." Near the end, it did use its annoying key-mashing mechanic to make my wrist suffer as much as the characters, but I'm thankful the regression into Commodore 64-era design was brief.

I'm lightly disappointed by episode three's pacing. Its urgency makes the short running time (about an hour and a half) hard to turn away from, but I missed the first episode's moment of repose, where Bigby returns to his apartment to feel sorry for himself. I left the episode wondering what Bigby might think and say given a little time to reflect. There is one brilliant, brief moment of calm in this episode, though. I won't spoil the details, but it asks Bigby and the player to answer a question about their motives, and was the only thing I answered with silence.

The worst part of A Crooked Mile is how it uses the threat of sexual violence as an obvious ploy to manipulate Bigby and the player into hasty and severe action. It's easy to see through from the first scene, and put me in a position to temper Bigby's anger with my foreknowledge. The Wolf Among Us is better when it doesn't try so hard to push me in a direction just so it can spin me around, and with the danger of gruesome violence already in play, using my repulsion of sex crimes to motivate feels unnecessarily exploitative.

Thank goodness Snow has developed into better character, though. She no longer seeks Bigby's approval, now demanding it and revealing some of her flaws. Navigating her flaws along with Bigby's is much more interesting than the relationship set up in the first two episodes, which leaned more heavily on a desire to protect her. She's still vulnerable, and Bigby is still afraid for her, but the decisions here are more about questioning her judgment than taking responsibility for her well-being. Though she's still the voice of compassion and empathy, some of her advice feels dangerous.

A Crooked Mile's story is a winner for the flaws of its sympathetic characters, not its villains or its condemnation of the worst in humanity. In that department, Telltale is a noir completionist, hitting greed, corruption, violence, deception, prejudice, vengeance, addition, and obsession. This is the greatest expression so far of how conflicted, frightened heroes confront all that misery, with subtle choices that don't forecast their consequences, and the best crime scene investigations yet.

The Wolf Among Us Episode Three

A great comeback from episode two, A Crooked Mile amplifies the dramathough sometimes in the wrong waysand confronts Bigby with hard choices and proper detective work.