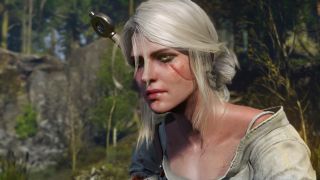 Netflix's adaptation of The Witcher looked very different in showrunner Lauren Hissrich's original pitch, which featured Ciri as the show's focus and narrator. Based on the fifth book, The Lady of the Lake, she would have been our anchor to the world of The Witcher, but the pitch was missing something.

"I realised as I started writing that version that I wasn't getting enough of Geralt and his perspective, because it was being told through Ciri," Hissrich explains in a video from MCM Comic Con. "So it actually took me a while; I went through several versions."

Eventually she apparently found a way to give Geralt, Ciri and Yennefer each the attention they deserve, using the The Last Wish and Sword of Destiny, the first two books, along with some stuff unique to the Netflix series.

While Geralt is ostensibly the main character, Ciri and Yennefer both play huge roles, so Hissrich wanted to give people a better introduction to them. We'll meet them individually and get to know them before their paths converge in the show, rather than through Geralt.

"What I wanted to capture is these women before they were seen through the lens of anyone else. In the books, all the characters are met through Geralt, so you get Geralt's impression of them, then you get to meet them, and I wanted the world to see Ciri who she was first."

The trailers have made me hopeful that we'll get a good fantasy romp, but I would have liked to have seen Hissrich's adaptation of The Lady in the Lake. I have a feeling all the stuff with Ciri hanging out with Sir Galahad in Camelot would have been cut, though. More seasons are planned, of course, so some of that original pitch could reappear.

The Witcher kicks off on Netflix on December 20.