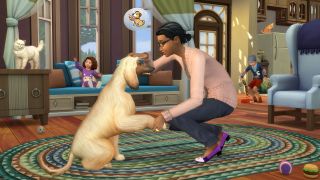 The Sims may be hitting 20 years old within the next week, but Maxis's series is showing no signs of slowing down, according to EA's most recent earnings report.

In the document, it was announced that The Sims 4, the latest entry released in 2014, has hit a rather healthy 20 million lifetime players across all platforms. While this doesn't necessarily add up to total sales, as the game is included in EA's Origin Access subscription service on PC and EA Access on consoles, it still shows the staying power of the game.

The Sims 4 is the longest-running entry in Sims history, coming up to its sixth anniversary compared to The Sims 2 and 3's five years of post-launch support each, and the first game's four. Its time at the top will eventually come to an end, though, as EA CEO Andrew Wilson has confirmed that the series will receive a next-gen instalment at some point in the future.

In an audio recording of EA's latest earnings call posted by Sims Community, Wilson confirms that Maxis is continuing to "think about The Sims for a new generation", citing recent gaming advancements like cross-platform play and the cloud to expand your neighbourhood with other players. He explicitly mentions the long-since-dead The Sims Online, which shut its doors in 2008, and its emphasis on "social interactions and competition" as an example of where the series may be headed.

We've known Maxis has been working on a new game since at least September 2018, when Sims Community uncovered job listings looking for artists to work on "an early-in-development AAA title" that required work on characters, fashion, faces, hair and cloth. While this listing could have been for anything, it does all sound very… Sim-y.

Expect to hear more about The Sims post-The Sims 4 in the coming months.