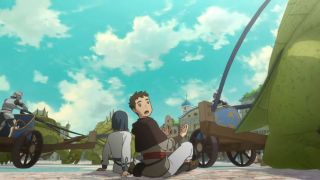 The Ni No Kuni movie, a Level-5 production which is being directed by Yoshiyuki Momose, will receive a western release via Netflix this year. VG247 are reporting that it's a dubbed version, and if that's true let's hope that it's one of the better dubs like Cowboy Bebop or um, er.

The Ni No Kuni movie tells a new story, but is based in part on the first game. It's about two teenagers who travel to another world to save their friend, and find out she has an otherworld counterpart who is also in peril.

Director Yoshiyuki Momose worked on both Ni No Kuni games and was an animator on Studio Ghibli movies Spirited Away and Porco Rosso, as well as being assistant animation director on Grave of the Fireflies. Ni No Kuni will be available on Netflix from January 16.