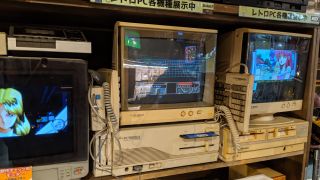 Every year, we're delighted to share the achievements and dreams of PC gamers and modders, the history of our hobby, and our experiences with games and their creators. In no particular order, these are a few of our favorite PC Gamer features from 2019, from interviews with creative community members and developers to stories about roleplaying as a shark and starting a whale-watching cult in GTA.

We look forward to publishing many more interviews, deep dives and absurd sea life-related GTA stories in 2020. Thank you for reading!

Osu! Is a wild rhythm game that some esports players use to warm up. Others now compete to break world records on fast-paced songs that demand impeccable reflexes.

• The untimely death of Warhammer Online, and the long road to resurrect it

Warhammer Online was an ambitious MMO that didn't quite pan out, but some diehards have spent years bringing it back online with fan servers, and fixing some of its most glaring issues. Warhammer expert Jody Macgregor talked to them about restoring it, and found an MMO still worth playing in 2019.

• Making penises in games: it's hard

Lauren Morton took a serious look at why it's so difficult for modders to add dongs to games, and introduced us to a dozen new euphemisms.

• How Brazil fell in love with Counter-Strike

On the road at the Katowice esports tournament, Luke WInkie talked to players and fans about the intense love for Brazil's Counter-Strike teams.

• The story of the first esports champion, undefeated since 1972

Esports didn't start with Quake or Counter-Strike. Travel back with us and Bruce Baumgart to the '70s, when he won the first recorded esports tournament for Spacewar!

• In this police simulator, the only thing harder than being a bad cop is being a good one

"I've already tried punching my coworkers in the police station and jumping onto my captain's desk, but neither work: there's no punch button and Phil's vertical leap is pathetic. So instead, I take out the pepper spray I've been given and immediately spray it into the face of the guy in the armory who gave it to me."

Nearly 20 years into Runescape's life, a new YouTube series earns millions of views thanks to a playstyle that's "both staggeringly restrictive and incredibly inventive. His trading, banking, and geographical limitations force him to explore every corner of Morytania and leverage unconventional, often overlooked techniques in order to achieve things most players take for granted."

Sleeps-on-Bridges is an Elder Scrolls Online player who sleeps on bridges. Lauren followed him around, discovering a loyal cult of chill bridge sleepers.

James wrote an eye-opening report on the shameless pandering aimed at kids who like Fortnite, and the videos he finds are entirely brazen in their sheer awfulness.

• The making of TIE Fighter: How being the bad guys changed Star Wars forever

Star Wars expert Alex Kane talks to the developers of TIE Fighter about how it was made, and weaves in the context of how significant a game from the Empire's perspective was back in 1994.

Since Maneater hasn't come out yet, Chris becomes a shark in GTA 5. An extremely stealthy shark who lures cab drivers to the ocean by, um… calling them on his cellphone.

• The 9-year journey to explore each of EVE Online's 7,805 solar systems

Katia Sae's story isn't like other EVE stories. He didn't start a war and he wasn't a double agent. He was just a quiet adventurer on a quest to visit every moon and planet in the galaxy—but this is EVE, of course, so he did it with a bounty on his head and patient assassins in his way.

As the internet grappled with DeepFakes, adult game House Party partnered with a YouTube star to add her likeness to a character players can have sex with. We talked to YouTuber LetyDoesStuff about why she decided to be in the game.

• Censorship, Steam, and the explosive rise of PC gaming in China

It isn't clear why Steam has been allowed to operate largely unregulated in China, and with a new, region-specific version on the way, things could change dramatically soon. Steven provides a clear overview of how PC gaming and game development have grown in China over the past two decades, and what challenges lie ahead.

• What it's like to go to college on an esports scholarship

Collegiate esports, while still a relatively new concept, has grown massively over the last few years. But there's still controversy over just how exactly the games—and their players—fit along the long-standing world of traditional sports. Joanna talked to colleges and students around the country for an inside look at the current state of collegiate esports.

A look inside Tokyo's Game Preservation Society, where you can find such games as Jesus and Jesus 2.

• I've become the worst kind of Sea of Thieves pirate: the outpost ambusher

Chris reveals he likes to hide on islands in Sea of Thieves and ambush real pirates to steal their hard-earned treasure. It's a terrible thing to do and he should feel terrible about it, but somehow he doesn't.

• Breaking the internet: The story of EverQuest, the MMO that changed everything

Steven tells the deep, fascinating story of how one of the most groundbreaking games in PC history was made, with input from most of the developers who were there from the beginning. EverQuest was so popular when it launched, it actually broke the internet in San Diego for a week.

• The ethics of smurfing

Is playing on a second account cheating? And if so, should it be punished? Nicole Carpenter talked to players and developers about how bad it really is to play on a smurf account.

• Destiny 2 players spent weeks grinding to end the Dreaming City's curse, but may have made things worse

A vague reference in an obscure lore book prompted Destiny 2 players to spend weeks grinding bounties in an effort to bring resolution to one of the game's biggest mysteries. It was all a lie.

• EVE Online will one day be sentient, its developers told me during a nude hot tub session

CCP's yearly EVE Online FanFest celebration was a little different this year, and found Steven in a hot tub somewhere in Finland.

• Bee Simulator is more action game than sim, but at least you can sting kids in the head

Chris became a bee and immediately went on the attack.

• How a joke about the milkman inspired Psychonauts' best level

The developers at Double Fine take us through the creation of Psychonauts’ Milkman Conspiracy level, a world conjured up by a paranoid, conspiracy-obsessed security guard.

• After a secret server shocked the community, 100,000 fans are finally playing City of Heroes again

City of Heroes closed its doors seven years ago, but the community perseveres, sometimes by supporting in-development spiritual successors, and in this case by playing on a private server where Paragon City lives on.

Chris models an esports team after the PC Gamer writers, and finds out they're all a bunch of whiners who hate being trapped in a tiny room together at all times. He also discovers there's a job called "Esports Private Investigator" and immediately pay thousands of dollars for it.

Rev up that GeForce GTX 295 and hop into Batman: Arkham Asylum with a bottle of Bawls at your side—here's what the PC gaming scene looked like 10 years ago.

One of many Joe Donnelly GTA roleplay adventures, this episode sees him start a whale-worshiping cult despite a notable lack of whales.

• The 69 biggest, weirdest moments of the decade in PC gaming

An abridged tour of the past 10 years and all the strange, surprising developments we lived through along the way—hats, crowdfunding, horrible glitched Assassin's Creed faces, bad jokes, good jokes, and more.