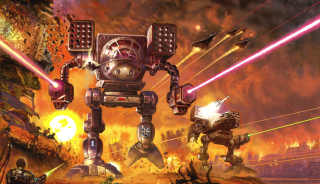 MechWarrior 5: Mercenaries is a return to form for the series. Built by the same developers behind MechWarrior Online, Piranha Games, but with a change to Unreal Engine 4 in place of MWO's CryEngine, it's a brave new world. Our review covers the game design, but I'm here to talk exclusively about performance and settings.

I played the hell out of the original MechWarrior back in the day, in glorious 16-color EVGA graphics with sound effects coming from my internal PC speaker. When I upgraded from an 8086 to a 386 processor, the slow and ponderous battles became far more exciting. We've thankfully moved beyond the era of game speed being linked to your PC's performance (mostly), but 30 years later, the core gameplay in MechWarrior 5: Mercenaries isn't radically different. The graphics meanwhile have improved tremendously. My 16-year-old self would have loved MechWarrior 5: Mercenaries, warts and all.

A word on our sponsor

As our performance analysis partner, MSI provided the hardware we needed to test MechWarrior 5 Mercenaries on a variety of AMD and Nvidia GPUs, as well as AMD and Intel CPUs. Thanks, MSI!

MechWarrior 5: Mercenaries was also one of a select few games that Nvidia trotted onto the stage at Gamescom 2018 to demonstrate what ray tracing can do to enhance the look and feel of a game. That was a long time ago, and the short demo was obviously very early, but 16 months later there's still no ray tracing for the initial launch.

A Piranha representative told me that a ray tracing patch is planned for January, so we'll see how that goes, but even without ray tracing effects MechWarrior 5 can be quite demanding.

It can also look pretty awful when you turn down certain settings. That's perhaps too subjective, but at low and medium settings, shadows and textures are dithered in a way that's very obvious and distracting. The good news is that some of the settings that have the largest visual impact aren't actually that demanding, so let's drop right in to the various settings and what they do.

If you want recommendations on what settings to use for most graphics cards, I'll give two options on each setting. The lower setting is good and what I actually recommend, while the higher option (in parentheses) gives a small improvement in image fidelity for a modest drop in performance.

Here are my recommended settings:

The above gallery shows the resulting image quality for my recommended and 'step up' settings, along with maximum quality. The lower settings improve performance by about 45 percent, while the higher settings improve performance by only 15 percent. If you look at the three images, however, other than slight variations in the procedural generation of trees and rocks, they're all about equivalent.

I've run tests on AMD's RX 5700 and Nvidia's RTX 2060 to compare performance with the various settings turned down. There are no presets, but most of the settings have low, medium, high, and maximum options, which is what I've used for testing. When testing the lowering of individual settings, all of the other settings are at maximum.

As far as performance goes, Textures, Anti-Aliasing, and Sharpening are all relatively lightweight and can be left on high or maximum settings with most PCs—I have more to say about AA below. Effects can drop performance a bit more and deals with things like screen space reflections, so if you're looking to boost performance, turning it down is worthwhile.

Dropping View Distance can improve framerates by around 5-10 percent, but you also get quite a lot of visible object pop-in on the near and medium settings. Stick with far or maximum if your PC is fast enough.

Foliage has a 5-10 percent impact on performance depending on the scene. If you're on an ice or desert planet, foliage obviously matters less than on a forested world. The difference between maximum and low is very noticeable, but the medium and high settings are a good compromise. Also, it's the one setting that requires you to restart the game for it to take effect.

The Anisotropy setting (aka, anisotropic filtering) is interesting, as in many games it doesn't affect performance much. However, on at least one budget GPU, the 16x setting could drop performance a relatively massive 25-30 percent. Even on midrange GPUs, going from 16x to 0x can boost performance by up to 15 percent. You get nearly all of the minor improvement in image fidelity at the 4x setting, with about a 7 percent jump in performance compared to 16x—or get most of the benefits at the 2x setting with a 12 percent increase in performance.

Shadows is nominally the heaviest setting, depending on the scene. In the mech bay, turning it all the way down can improve performance by 40-50 percent. Outside, testing in several missions shows a much smaller 10 percent difference—there are fewer large shadows and lights to deal with. Note that setting shadows to low is the same as turning off all dynamic shadows, which can cause a noticeable change in visuals—everything looks a bit flat and lifeless without any shadows. Stick with medium and you get most of the benefits without the performance impact.

Turning Post Processing all the way down can improve performance by 10-20 percent (again, depending on the scene). Post processing also seems to include ambient occlusion, or at least some effects that help with contrast. At the low setting, everything looks a bit washed out. Medium or high are a good compromise.

Anti-Aliasing has a major impact on visuals in MechWarrior 5, and I can see no good reason to turn it down. The 1-3 percent improvement in framerates at the cost of jaggies and other visual artifacts isn't a good tradeoff. I mentioned a dithering effect on the shadows earlier, and you might think that comes from turning down shadow quality, but it's actually linked with AA. At low and medium, especially when everything is in motion, the dithering looks downright ugly. Definitely leave this on high or maximum. Still images don't do this justice (or injustice), so here are links to maximum quality and low anti-aliasing videos.

Sharpening helps mitigate some of the softness caused by the temporal anti-aliasing. MechWarrior 5 uses AMD's FidelityFX technology, and the negligible 0.5-1 percent drop in performance is well worth the improvements in image quality.

Besides the graphics settings, there are a few other items to call out. MechWarrior 5 properly detected and worked with all the resolutions and aspect ratios I tried (16:9, 21:9, and 32:9). However, it doesn't auto-adjust the field of view and instead just vertically crops things.

You can manually adjust FOV, with a default setting of 75. To get a proper ultrawide result, you'll want to set the FOV to around 105, while doublewide displays will need to max out the FOV at 120—and there's no way to go wider short of manually hacking things. There are separate first person and third person FOV sliders.

There's also no way (right now) to remove the HUD—no picture mode, no reduced HUD option, no Ansel. That means images and gameplay videos will always show your mech status, weapons status, minimap, etc. It's perhaps a minor complaint, but the promo videos don't have the HUD visible and this should be an easy fix.

Last is mod support. It doesn't exist yet, but in its FAQ Piranha Games says, "We are fully committed to supporting mod making for MechWarrior 5: Mercenaries. After the game releases, we will be working hard to release the editor and everything needed to create mods. Then early in 2020, we will integrate the end user experience for mod makers to share their creations with the community."

I've run a limited set of benchmarks with MechWarrior 5, using five GPUs and four CPUs. Basically, I've covered the budget, mainstream, and high-end GPU options, and then checked budget and high-end CPUs from AMD and Intel. Here are the results, testing at medium (ugly) and maximum (not ugly) settings.

The GPU side of things doesn't hold too many surprises. AMD and Nvidia are relatively evenly matched with current generation mainstream cards, with the RX 5700 slightly outperforming the RTX 2060. On the budget cards, AMD's previous generation RX 570 4GB really struggles—it can mostly handle 1080p medium (and turning up AA won't matter much), but at maximum quality it falls far behind Nvidia's 1650 Super. Of course, AMD has the RX 5500 XT slated to take on Nvidia in the budget sector, but that card isn't quite out yet.

For the high-end and extreme options, Nvidia is really the only game in town right now. And even the RTX 2080 Ti isn't going to do 4K at maximum quality without the occasional struggles. Some maps run quite a bit better than what I'm showing in these charts, so 4K with a mix of medium and high settings is certainly viable, but don't plan on maxing out everything—especially not once the ray tracing patch arrives.

The CPU testing results are a different matter, with AMD's Ryzen processors doing quite poorly at medium settings. The i5-8400 easily beats AMD's 3900X, and the overclocked 8700K (which normally delivers about the same performance as a stock i7-9700K) leads the i5 by nearly 40 percent. The 3900X meanwhile is only about 8 percent faster than the older Ryzen 5 2600.

The differences among the CPUs become far less important at maximum quality, and interestingly the i5-8400 jumps ahead of the Core i7 even though it has a 1GHz clockspeed deficit. That suggests Hyper-Threading (and AMD's equivalent SMT) isn't playing well with the game. If you're hoping for 144 fps or more and are willing to lower your settings, the CPU can make a difference. For most, however, the pace of MechWarrior 5 isn't as frantic as a typical FPS and 60 fps should be fine.

MechWarrior 5: Mercenaries is surprising in many ways. After the relatively mediocre MechWarrior Online, there were concerns about what sort of game we would get. Some of the planned features are still missing—like ray tracing support—and the storyline and script are at times laughable (and not in a good way). But the game runs well, particularly after tuning a few settings, and the mech combat is great.

A lot of games use Unreal Engine, but even so there are major differences in how the final product performs. I'm still a bit baffled by whatever's going on with the anti-aliasing setting in MechWarrior, for example—it's not a problem I've encountered in other UE4 games. It's the one setting that you really need to turn up if you want the game to not look terrible.

In terms of hardware requirements, the latest AMD and Nvidia GPUs appear to do well in MechWarrior 5, but previous generation hardware at times struggles. I'm also surprised at how large the gap is between AMD and Intel CPUs, and further optimizations could certainly help. That may not happen, however, as Piranha Games is a relatively small studio—this is technically an indie game, even though MechWarrior used to be a major franchise.

Regardless, the mech battles are good stomping fun. If you've spent a chunk of the past 20 or so years waiting for a proper MechWarrior game, this is as good as it gets.

Thanks again to MSI for providing the hardware for our testing of MechWarrior 5: Mercenaries.