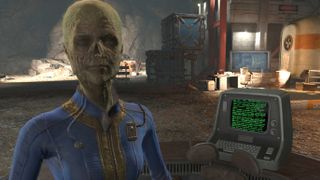 We used to read eulogies for PC gaming on a near-monthly basis in articles and forums across the internet. You don't really hear it much anymore, probably because after years of doomsaying and pulse-checking, people have begun to realize that PC gaming, like any other industry with its share of ups and downs and middles, is obviously here to stay.

But declaring the death rattle of PC gaming was an extremely common practice in the 2000s and continued well into this decade. What killed PC gaming dead over the past 10 years? Consoles. Piracy. DRM. Laptops. Smartphones. Loot boxes. Retail sales. Digital sales. Casual games. AAA games. No good games! All of these have been blamed for the death of PC gaming, forming an extremely crowded grassy knoll of suspects with smoking guns.

Well, it's no surprise to us but PC gaming is still here, and so are we—though you wouldn't know it from what you're about to read. Here are 13 times PC gaming has died in the past 10 years (or so—I did lift a couple from mid-2009).

"You'll see plenty of desktop towers for years to come, in megamarts if not in people's homes. You'll still hear news about the latest, greatest graphics cards, desktop processors and the like. Enthusiasts and fansites will stay as enthusiastic and fanatical as they've ever been. These, though, are lagging indicators, trailing behind a dead (or maybe more accurately, undead) computing ideal that the computer-using public has pretty much finished abandoning."

A report that desktop sales were down and laptop sales were up, plus the misreading of another report from NPD (which didn't include digital game sales) were enough to declare the desktop PCs were canceled forever. In this grim future, we were only playing games on laptops and people hated building their own PCs. RIP.

"...we're left wondering if the era of the extreme gaming rig is over—replaced by a mix of 10-inch Netbooks and console games. It's an argument some have been making for years (or rebutting), but the oft-reported 'Death of PC Games' really does seem closer than ever."

You'd think that the fact that people have been making the argument for years would be a tip-off that it wasn't true. I guess not. Anyway, there's a cool laptop that can run big PC games (if you spend $5,000 on it) so again, desktop PCs must be dead, and PC gaming along with it. Though… what exactly were we going to be playing on our gaming laptops again, if not PC games?

Chipchick: PC Gaming is Dying, But Don’t Blame it on Consoles

"There is a whole industry surrounding expensive gaming rigs that each try to out do each other with their video game performance. But really, what is the point anymore when it’s so difficult to buy an actual PC game altogether."

Before online shopping (and shipping) had truly taken over, the culprit for this writer was that PC games were hard to find in brick and mortar stores in 2009. It's not a bad point—even today, it's still incredibly difficult for people who don't have great internet where they live to download the mega-sized digital PC games and all the unending updates they receive. Yet, PC gaming lives on, somehow.

"It was, with the widespread use, integration and acceptance of the internet and a rapid increase in bandwidth from broadband suppliers, almost inevitable that PC gaming would flourish beautifully for a moment and then die, like the Christmas trees we threw on the compost heap last week."

The article posits multiple reasons for the death of PC gaming: piracy of digital games, the lack of dedicated servers, customers unwilling to pay full price for digital goods, developers unwilling to develop games for different hardware configurations, and more. That's a lot of different bullets lodged in the twitching corpse of PC gaming.

Speaking to Game Informer, Kinect creator Kudo Tsunoda said shooters were done on PC. "Halo did an awesome job of building a first-person shooter exclusively for the console, and now hardly anyone plays first person shooters on the PC anymore. It’s all about the console."

As we know, we've got tons of FPS games on PC. And plenty of people play them on consoles, too! It's almost as if people can use two different platforms for the same thing without one of those platforms horribly dying. As for the Kinect, well...

"Just as digital downloads will [decline] over the next decade or so (Why? Because you can't resell a digital download!), I expect consoles to become the default games platform and for PCs to just be the place where people fill their time with FarmVille and 'games' like that."

"Digital download" remains one of the most harmful phrases formed yet by man.

"As much as PC gamers would love to come to the defense of their beloved rigs, towers and skyscrapers with enough juice running through them to power a small city block, it’s time to concede to what many of us already knew: retail PC gaming is dying."

This was based on a PricewaterhouseCoopers (yeah, all one long stupid word) report that retail PC games was the only segment not growing, and that—great scott—people pirate PC games. And it's a weird article because, yes, retail purchases were shrinking while digital distribution was growing. But then why cast aspersions at our rigs and towers? Both physical and digital PC games still need a PC. I don't get it.

TGDaily: PC gaming is dead, even id says so

After the problematic launch of Rage on PC, John Carmack blamed AMD and Nvidia drivers for the game's issues, and said: “We do not see the PC as the leading platform for games. That statement will enrage some people, but it is hard to characterize it otherwise; both console versions will have larger audiences than the PC version.”

As one of the gods of PC gaming himself, it's uncomfortable to read this from Carmack, even considering how wounded id must have been by Rage's poor reception. Carmack, of course, went on to join Oculus as its chief technology officer in 2013 before moving on this year.

"The steep decline in unit sales (including digital) has gone mostly unnoticed because of skyrocket growth in the casual sector. Denialists will point to this and shriek that it disproves my point. Whether or not that's actually true depends on whether you consider Angry Birds an effective replacement for Civilization V."

Another briefly glanced-at chart, another declaration that no big games for PC will be made anymore, leaving us only with casual stuff. Which is why I'm sitting here playing Angry Birds 6 instead of Civ 6.

This is How PC Gaming Ends… Not with a Bang, but with a Whimper

"This is how PC Gaming dies; it will be slowly destroyed by an ever increasing console market until there just isn’t any reason to spend all of your money on a new graphics card. It won’t happen soon, and it won’t be immediate, but it’s already started and its going to take a lot to stop it."

Melodrama and semicolons? Nice. Piracy, console popularity, and the lack of uniformity of PCs are all listed as reasons here, but the central premise is that Blizzard released Diablo 3 on console, and thus was abandoning PCs, and thus PC gaming would perish, albeit slowly.

"Piracy isn't visibly disrupting anything, and yet if gamers don't act, PC gaming could go the same way as gaming on Macs – near nonexistent."

This is a collection of quotes from developers who felt piracy was threatening PC gaming. There's no doubt piracy was a big issue (and that it still happens) but it certainly was never in danger of killing PC gaming.

Wired: No, Really, the PC Is Dying and It's Not Coming Back

"A little while back, we started to hear a few voices speaking up against the drumbeat of doom. No, PCs weren't dead. They were maybe even coming back. Well, they're not."

What can we extrapolate based on a report saying Apple sold a lot of iPhones while PCs were selling fewer than expected? That PCs are dead and this time (unlike all the other times) it won't be resurrected. Because no one has a computer and a phone. It's one or the other.

MarketWatch: Opinion: PC gaming is in a decline — and deserves to be

Mmmk. There's a lot to unpack in this article from (shockingly) just last year, though I'd honestly rather just shove the whole thing in the trash. There's the whole 'back in my day' crap about games not being as good as they used to—PC games were great back then and they're obviously still great now. The writer calls current games derivative, labeling Fortnite a PUBG clone (there should only be one game in each genre, apparently). I agree loot boxes have obviously been a big issue, but there's been plenty of pushback from players (and even a number of governments) and loot boxes are clearly not going to put PC gaming in a tailspin.

Battlefield 5 is called out for trying so hard to be politically correct that it became historically inaccurate—hate to break it to you, but our boys weren't flying into Normandy standing on the wings of planes, as we've been doing for years in Battlefield. And even despite EA's stock dropping after Battlefield 5 didn't perform to expectations, the company still posted an increase in profit and revenue. This whole article basically all boils down to: I don't like PC gaming as much as I used to, which must mean it's in decline. If I don't like something, no one possibly could.

So, look. PC gaming has, and will continue to have, various issues and problems and shortcomings. Like literally everything else in the world, it's not perfect. But if you want to pull one lesson from decades of people predicting PC gaming is declining or dying or dead, here's that lesson: it wasn't, it isn't, and it ain't gonna be.

Just to be fair, PC gaming isn't the only thing that died repeatedly this decade. So did console gaming! Here's proof from the maker of Angry Birds, in 2013:

"Innovation in gaming has clearly moved into mobile and social, Vesterbacka said, largely because those companies are more 'nimble'— it’s easy to develop and release new content quickly. In fact, he said as mobile gaming (including games on tablet devices like the iPad) continues to grow, console games are 'dying'."