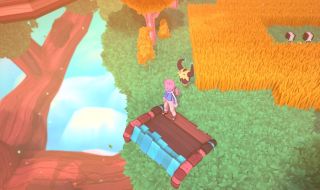 A Pokémon-inspired MMO has finally arrived on PC in the form of the creature-collecting game Temtem, made by Spanish developers Crema Games. After playing Temtem's Early Access build last week and into this week—exploring the airborne archipelagos, catching Temtem, battling other players, chatting to NPCs—it's not just a 'clone' inspired by Pokémon but it's a successful game in its own right and a big part of this is because Temtem addresses many of Pokémon's shortcomings.

That's not to say that the 23-year-old Japanese RPG is bad—far from it. Pokémon Sword and Shield has arguably brought the series to new heights. In a Reddit AMA Crema did on the MMO subreddit last year, they mentioned that they loved Pokémon but thought that over the years Nintendo had gone in a different direction with the series. I agree.

As much as I love the fact that the Gala region in Sword and Shield is based off the UK, the environments don't change much. Not to knock the UK, but it's mostly a lot of overcast weather, brick buildings, a few fields, and Big Ben. In Temtem there are six unique islands with vastly different environments. The six archipelagos feature tropical islands, volcanoes, villages top huge trees, crystal caverns, and sunny savannas.

Each island has several villages full of chatty NPCs, who are more than keen to tell you about the world and the titular Temtem. NPCs even act differently from town to town. The folk in Omninesia are open and friendly, always keen to point you in the right direction of the village bridge system. Deniz, on the other hand, have a more carefree approach although they have a distinct distaste for tourists.

Every NPC seems to know everyone else. You are always bumping into characters who know you through chatting to someone else. You meet grandmas that comment on how you look like your mum, and Temtem dojo masters happy to see you're finally ready to battle them. It feels like the world of Temtem revolves around you, whereas in Pokémon Sword and Shield I felt like I wasn't even the main character in my own story.

Just because Temtem's residents treat you nicely doesn't mean that they go easy on you in battle. Temtem really drives home the importance of learning synergies and the strengths and weaknesses of different Temtem types. It's not really possible to wing it, and this becomes obvious in the first two major battles in the game. One is against the first dojo leader, who has a full party of powerful Temtem, and the other is against one of the game's main antagonists, who is savvy with their Temtem's synergies. In Pokémon, it's good to have a diverse team but in Temtem you need synergy too. Having multiple Temtems working in conjunction with each other is key to victory.

Temtem's stamina meter also dramatically switches up the 2v2 battle system. Each attack a Temtem has will deplete its stamina bar. Knowing when you unleash a powerful attack and when to reserve stamina is key, as your Temtem will start to take exhaustion damage when stamina reaches zero.

It's not just your stamina bar you should be paying attention to. Temtem displays your opponent's stamina bar too—a small but important insight. Letting an opponent wear themselves out by using strong attacks is a valid strategy. If you can survive a couple of big hits, they are left vulnerable to your beefy attacks. In Pokemon, you could sometimes figure out your opponent's attack SP and guess when they were depleted, but in Temtem the information is out in the open and the depletion rate is much faster. I defeated many opponents by just holding on that little bit longer.

Temtem starters: pick the best one for you Temtem evolution: how to evolve your creatures Temtem type chart: every type's strengths and weaknesses Temtem Luma: how to find them Temtem list: all the species we know so far

Winning a battle by a sliver of health against an NPC is one thing, but a narrow win against another player is even sweeter. Hitting the Tab key lets you access Casual or Competitive play with nearby players.

MMOs really shine when they encourage you to interact with others. Seeing everyone's personalised character with their chosen Temtem bouncing behind them injects so much energy into the environment. If you're not one for battles, you can find fun bombarding an NPC's home, joining a group that all have the Temtem Ganki following them, or seeing a trio of characters created to look like Pokémon's Ash, Brock, and Misty.

Temtem tries to improve on Pokémon's traditional grind. Characters throughout the world have various sidequests that make you traverse between towns. You still need to fight a little, but at least you can see three or four other people running around in circles in the same grass patch, which at least makes you feel that little less silly.

In our best MMOs in 2020 guide, I would put Temtem in the "Theme Park" MMOs, In Steven's MMO guide he describes Theme Park MMOs like this: "They don't push you into deep waters like most sandbox MMOs do, instead wrapping you up in a comforting and familiar blanket."

When I play Temtem I feel like there's no baggage. It's great at channeling the child-like excitement you get from first playing a Pokémon game—the feeling of not knowing what to expect. Its foundations are built from Nintendo's creature collecting RPG but then it expands upon it into something different, and better.