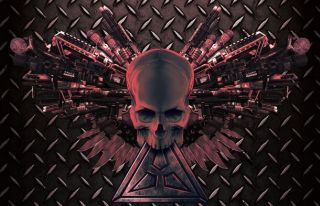 The Rise of the Triad announcement teased last week has been revealed, and it's not a sequel: It's a soundtrack! And no, that's not quite as exciting as a new game, but Dave Oshry, Rise of the Triad's principal director and marketing dude, says there's more to come in the future.

"We've got a list of things we want to do, things we're working on and things that may or may not happen," he said. "I don't want to promise anything (because that's never a good idea in game development) but we're 100 percent committed to continuing to add features, content, tweaks and value to the ROTT reboot this year and continuing to reward the people who pre-ordered the game or were there playing with us on day one."

Longer term, he said the studio is aiming to release a "Ludicrous Edition" of the game that will collect everything—the Rise of the Triad remake, the soundtrack, the original 1995 release, the Extreme ROTT map pack, and whatever else it comes up with—into a single package. "And want to give that to people who pre-ordered the game for free, as a reward for being part of the ROTT community," Oshry said. "They've been getting weird with us for two years now and some of them have been fans of all things ROTT for 20 years now. It's a fun IP to be a part of."

As for the soundtrack, it contains 30 tracks composed by Andrew Hulshult, with inspirational titles like "Suck This," "Run Like Smeg," "I Choose the Stairs," "M-M-M-Menu," and, "OWW." Only about 20 of the tracks are actually in Rise of the Triad, but all of them will be remastered and added to the game in a future update. It's available now on Steam and will arrive soon on iTunes, Google Play, Spotify, and other fine purveyors of digital entertainment.