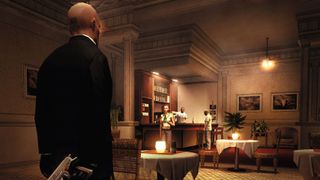 Throwing myself down an opulent corridor in a hail of bullets, dressed as a painter, was not how I pictured my return to Hitman: Blood Money. As I stumble down a flight of stairs, still holding a bloody hammer, I’m forced to concede that picking a lock in plain view of a guard wasn’t a good idea. Nor was using the hammer in the undignified kerfuffle that followed.

In light of the new game’s release, and with its Paris Showstopper shredding me, I decided to return to arguably the Hitman series’ crowning glory. And I just had to pick the Paris Opera House, didn’t I?

Feet that had been so used to the layout of the grand building suddenly falter in the labyrinth of passages. Where the hell am I? Why is there inadequate signage? In the event of a fire, this place would be an outrageous death trap. The irony.

I’m too busy getting worked up about Parisian health and safety standards to pay attention to where I’m going, and get stuck in a door that opens inwards rather than outwards. I’m turned into a bullet sponge. Again. My time in the Opera House is a three-act farce, more lethal to my self-esteem than I am to my two targets.

As my former prowess with the game fails to materialise I keep going back for more, working towards an ending where my targets, not me, get carted off in body-bags. This time I decide to stay out of trouble—hah—by engineering an accident, and set off to sabotage the winch for the chandelier, tucked away at the top of the opera house. One little problem... I can’t find it. I only have to go up. How hard can that be? Staggeringly, it seems. I yank open doors, alarm guards, barge into the ladies’ dressing room and retreat amid a shower of screams. I pick locks and swear at staircases that go the wrong way. Fate and a shitty sense of direction conspire against me and I end up accidentally killing someone in a toilet before being gunned down by guards.

Restarting, and this time attempting to be a smart arse, I disguise myself as an actor, complete with a ‘fake’ World War I pistol. I appear on stage as an executioner, hitting my mark beautifully. Then, in an unforgivable bit of overacting, I accidentally shoot my target a second time. My cover’s blown. Shots erupt around me, I stumble off stage, and, in the ensuing chaos, inadvertently discover the door I’d previously spent an age searching for. Feeling a Basil Fawltyesque meltdown coming on, I rattle up flights of steps to the roof space of the auditorium and find myself near the bloody winch room. There’s no time to whip anything with a Silverballer because, in my frustrated rage, I slip off a gantry and die an ignoble death on the stairwell below.

As an assassin and an actor I’ve failed. Worst of all, I died wearing an embarrassing moustache.

Despite the curtains closing on yet another of Agent 47’s lives, I couldn’t help but conclude that Blood Money’s sense of fun remains. I may have failed multiple times but I enjoyed it. I also learned that you should never send Frank Spencer to do an Agent’s job.