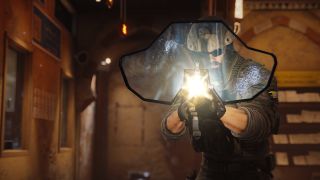 In preparation for Rainbow Six Siege Year 5, Ubisoft is testing dramatic nerfs and buffs that could shake up the meta, if implemented. Most significant among the tests is a sweeping increase to all aim-down-sight (ADS) times for every weapon in the game.

Blackbeard, Ying, Finka, and Ela are getting experimental buffs that could elevate them from the middle of the pack. Receiving nerfs are three of the most popular defenders around: Echo, Maestro, and Jäger. These changes are all happening on the Technical Test Server, so there’s no guarantee they will ever make it to the live game. But at the very least, Ubisoft is seriously exploring these ideas.

ADS time increased for all weapons

This is part reversion, and part new nerf. Ubi said the new ADS times are “similar” to what they were before first-person animations were reworked in Operation Ember Rise. Though, there are some noticeable exceptions. ADS times for secondary SMGs (SMG-11, SMG-12, Bearing 9, and C75 Auto) are over twice as long in this patch. That’s a big deal for ops whose loadouts tend to rely on these weapons—Smoke, Mute, and Dokkaebi would be most affected.

This is also a small buff for LMGs, which are now only 0.05 (down from 0.1s) seconds slower to aim than assault rifles. With the exception of the listed SMGs, the longer aim times won’t change much for players. We’re talking about fractions of a fraction of a second, after all.

Against his better judgment, Echo finally caved and bought a smartphone. Unfortunately, that means he can now be called by Dokkaebi like every other defender. His Yokai drones are now also susceptible to Dokkaebi’s camera hacks.

The proposed tweaks are a huge nerf to Echo’s main job in the meta: denying defuser plants with the Yokai’s sonic bursts. Since getting called by Dokkaebi’s Logic Bomb kicks defenders off cameras until they turn off the phone, a well-timed call can buy enough time for attackers to plant the defuser without fear. The light emitted by the Yokai when uncloaked might be the biggest nerf of all. If that light is bright enough, spotting and destroying the drone after it fires a burst could become trivial.

“We think the ALDA is powerful even without the ACOG and want to see if it’s removal will highlight its other great qualities,” reads the post. Maestro’s ALDA LMG is, hands down, one of the best weapons on defense. Players have long-suggested that an increase to its recoil would balance the qualities that make it a great anchoring weapon, but Ubi is instead opting for optics. Losing the sight does limit its dominance on some objectives, but it won’t change its stats.

Speaking of nerfs to powerful defender weapons, that’s a lot of damage lost from Jäger’s 416-C assault rifle. Ubi said the change is due to the 416 outperforming every other defender weapon. The knock down to 38 still places it higher than most, but it will take at least one more shot to kill in most situations. Jäger’s ADS devices still make him indispensable competitively, so his pick rate likely won’t budge.

This is a borderline rework for Ying. Trying to precisely throw or roll Ying’s Candelas has always felt like a game of chance, so I love that these changes focus on usability and clarity. Now you’ll be able to see through a wall if the Candela reached its intended target, which informs whether its safe to push enemies. The faster detonation time is downright scary. The whole thing is done detonating 0.3 seconds, bringing it closer to the instantaneous pop of a flash grenade than the methodical “thunk thunk thunk” of a Fuze charge.

Remember when Ela was the most overpowered thing in Siege? Her Scorpion hasn’t seen much attention since its big 2018 nerfs, but Ubi is taking a stab at its higher-than-average recoil. Lower recoil on a high fire rate weapon makes me a bit nervous, but time will tell how balanced it feels.

Small quality-of-life changes for Blackbeard that make a lot of sense. I still don’t think a headshot-blocking rifle shield belongs in Siege in the first place, but a faster ADS time could inspire players to forego the shield in particularly tense situations.

For almost two years, Finka’s Spear rifle has been among the weakest in the game. Four extra damage will help a bit, but most players will likely still favor the 6P41 LMG. Timed alongside her Adrenal Boost, the LMG becomes a laser that easily outclasses the Spear.

As noted by Ubi, the damage boost is mostly targeted at Nøkk. The FMG’s particularly weak stats make it a tough primary weapon. This boost brings it more-or-less in line with a typical defender SMG.