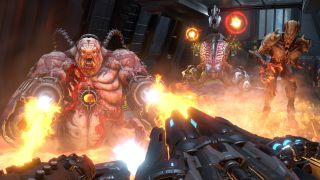 If you're not able to make it to Dallas for this year's QuakeCon, you'll still be able to catch a lot of it on Twitch. Bethesda has released the streaming schedule for the three-day event, which will officially start on July 26 with the Doom keynote, where you'll see more of Doom Eternal and its new multiplayer mode.

Even before the keynote, however, there's stuff to watch. The Elder Scrolls: Legends Masters Series quarter finals start at 10 am CT, and on Thursday players will be duking it out in QuakeWorld, Doom 2 and Elder Scrolls Online for your amusement.

From Friday, you'll be able to watch more tournaments, speed runs and streams, and if watching other people playing games isn't your cup of tea, you'll also be able to check out panels on the influence of Doom, Fallout 76, Doom Eternal and The Elder Scrolls Online.

By watching, you'll unlock stuff for various Bethesda games. Watch the keynote, for instance, and you'll get assault rifle skins for Rage 2. You'll need to link your Twitch account to your Bethesda.net and Elder Scrolls Online account to get everything.

Check out the full schedule here.

QuakeCon is also heading to Europe this year, with Doom Eternal being playable for the first time outside of North America. QuakeCon Europe will run from July 26 to July 27.