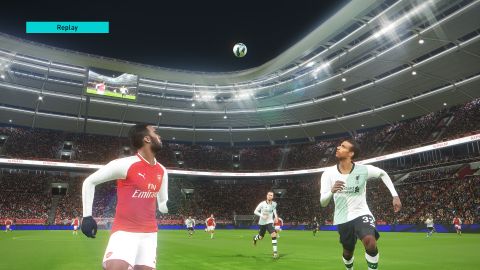 The definitive PES on PC, if you can get a game online.

Moving from PES to FIFA is like switching from an iPhone to an Android phone, or from an Xbox controller to a PlayStation one. The experience isn’t necessarily better or worse, but it is different in a hundred tiny ways. Long passes are more accurate, slide tackles are riskier, crosses are deadlier and keepers parry the ball just a little more often. It’s been a couple of years since I last tried Konami’s interpretation of the beautiful game, and my FIFA-ised muscle memory meant I spent the first couple of hours continually dropping passes too short and belting free kicks into the stands.

These differences aren’t just idiosyncrasies, though. When added together, they dictate how you play. In last year’s FIFA I favoured short, quick, possession passes, but the longer I spent with PES, the more ambitious my passing became. PES 2018 really nails the joy of an expertly lofted long pass, and that feeling inevitably influenced my decisions. Soon my game became more and more reliant on the risky killer ball or the whipped in cross, less Champions League and more FA Cup.

On the defensive side things were almost the opposite. The aforementioned slide tackles are very difficult to pull off, and likely to result in a card. So I adopted a more conservative style, gently jockeying the player on the ball rather than stepping in to take it away. It’s a perfectly good system, but I can’t help but miss the satisfaction of a well timed tackle.

But let’s talk about the elephant in the room: the PC port. While it’s safe to say that PES still regards the personal computing machine as a strange and alien concept (I had to go into the game folder and hunt for a separate settings executable just to change my resolution) this is no longer a ‘last gen port’. Unlike last year, PES 2018 looks every bit as good on PC as it does on the PS4 and Xbox, possibly even better on the highest settings. For those that want to capture the perfect screenshot, it also includes Nvidia's Ansel technology. There was a time when FIFA was noticeably the better-looking of the duelling football games, but that isn’t true any more, with only PES’s telltale licensing restrictions (Man Blue vs West Midlands Village, anyone?) making the difference apparent.

Any football game in this day and age comes with a bewildering amount of ways to play, more than I could possibly cover in detail. Among the best remains PES’s signature Master Team mode. It’s been jazzed up this year with new cinematics which don’t really add anything to the experience, but the formula of building a team of nobodies up from the bottom will never not be fun. There’s also the surprise delight that is Random Selection mode returning from over a decade of absence. The premise is simple: both players get a randomly selected pool of footballers, then there are a series of trading rounds where they attempt to poach each other’s stars while protecting their own. It’s absolutely perfect for playing head to head matches with a friend, offering a roughly level playing field while also giving you the opportunity to screw each other over by swiping Luis Suarez at the last minute.

On the other end of the scale there’s PES’s Become a Legend mode, in which you play as a single footballer and attempt to grow their career. Already saddled with an odd control scheme (double tap right bumper to call for the ball, really?) it now seems woefully dated next to the surprise success of FIFA’s story-driven equivalent.

Online, unfortunately, is another weak spot. Every time I tried to get an online match I was kept waiting for several minutes as the game desperately searched for someone to play with. Often I was kept waiting so long I would have quit out and played against the computer if I wasn’t writing a review. Yet when I did finally find an opponent, I found them surprisingly well matched to my meagre skill level, experiencing close 2-1 thrillers instead of the 5-0 drubbings one would expect in a game with a small, dedicated group of online players. Nevertheless, if PvP is your preference, you’re probably going to be better off with FIFA’s wider pool of talent.

I’ve mentioned FIFA a lot during this review, the two games seem doomed to chase one another forever after all, and most of us will choose one or the other each year. In a sense, this means that this review isn’t going to be complete until I get my hands on PES’s nemesis later this month. But one thing I can say for certain is that this is the best PES has ever been on PC and, so long as you’re not here just for online play, you should consider it a serious contender for your cash.

The definitive PES on PC, if you can get a game online.