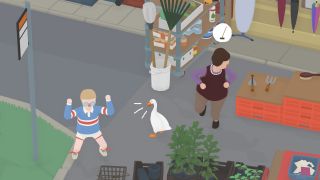 As a piece of software designed to accept input from your hands to produce lights and sounds for your eyes—in the most utilitarian and reductive sense—Untitled Goose Game is fine. Sometimes I want the goose to move quickly, but the somewhat awkward control scheme interprets it as a leisurely waddle. But overall: good.

The reason Untitled Goose Game succeeds to the extent it does—the reason it is now more meme than game—is, I think, as much about the setting as the malevolent goose. It’s a masterful depiction of English country idyll as a mask of tranquility that threatens to crack at any moment. A boy is playing in the town square. A man is enjoying a quiet afternoon in his garden. It’s nice. It’s peaceful. It’s a lie.

The boy is halfheartedly enacting the mechanics of play because he would rather be inside playing Fortnite or being awful on Reddit. He has been forced outside by his parents, who are no doubt the sort of people who think playing outside is the thing a boy ought to do.

The man—meticulous and fussy—is performatively relaxing with the considerable passive aggression of an older gentleman who just cannot with his neighbour. She is artistic and messy and feminine and other adjectives that have no place in his world. The morning has passed in a blur of thin-lipped pleasantries and tutting. At one point, inevitably, he would have muttered the word ‘unbelievable’ under his breath with exaggerated annunciation and a few decibels louder than he’d intended.

I have met these people. I have been this boy. I have dealt with the quiet judgement—the banal malice—that is a countryside village. You might think the gardener of the first act is just a nice man tending to his beds. But I know his shed is filled with the footballs of every child who kicked one over his fence. The developers might be Australian, but they clearly know what we’re like. They have seen us with our broadsheets and our rakes. They have lampooned us, good and proper.

By letting us be the goose, we’re given permission to take a break from our own social obligations. Hating people can be exhausting—the sheer mental effort of constructing a justification for your disdain that holds up to even the smallest of scrutiny. But Untitled Goose Game gives permission to cast off the flimsy code that keeps us from tearing each other apart and lets us celebrate in the mentality of petty jerkdom; the sheer joie de l’oie of it all. Fuck that gardener and his simple toil. Why? Because goose.

Heading into this lavish remake I had my reservations. My assumption was that, despite its revered status, much of the original’s retro strangeness wouldn’t hold up in the harsh light of HD graphics and modern sensibilities.

No amount of clever streamlining and updated controls could make its Scooby Doo-esque police station, replete with elaborate statue-based puzzles, an impressively stocked library and secret underground passages make any sense. The original’s setting, though deeply atmospheric at the time, was a product of an era when we expected less logic from our videogame settings. Transplanted to 2019, and invested with so much more detail and realism, how could it possibly maintain the suspension of disbelief that’s so vital to truly tense horror?

And yet, now that I finally come to play the game, I think that weirdness is its greatest strength. Raccoon City indeed doesn’t feel like a grounded, real place, but it doesn’t feel incoherent either. Instead it’s almost dream-like, a world that at first glance seems mundane but houses no end of strange mechanisms and creatures behind the facade.

I’d thought of Resident Evil 2 as simply B-movie horror, but this reimagining feels like something altogether more surreal. As I descend into a sprawling industrial space beneath the station, there are hints of Day of the Dead, sure, but I’m reminded more of the Silent Hill series’ transitions from everyday spaces into nightmarish realms.

Even its denizens feel more archetypal than biological. An enormous reptile dwelling in the sewers. A hulking stranger that simply follows you, ceaselessly. Savage hounds that roam abandoned streets. They’re more like urban legends than escaped test subjects. Even the zombies feel unearthly in their relentlessness.

Are Leon and Claire lost in some sort of urban purgatory? His anxieties over starting a new job unravelling into a nightmare where he has to shoot past the undead and then solve a convoluted logic puzzle just to open his desk? Her need for familial connection reflected in a lost little girl trying to make sense of her dad turning into a horrible eyeball monster? And which one of them subconsciously associates sewers with chess?

My day job often involves creating tutorials on how to use Windows apps and these need to come with screenshots. I’ve taken to recording video of what I’m doing, and then capturing screengrabs from that rather than trying to set something up artificially and wait for Snipping Tool to do its stuff, only to catch itself in its own screenshot and forcing me to start all over again.

This is the way a lot of the screenshots of games in this magazine are captured, as not every digital marketplace has a useful screenshot shortcut like Steam does. I’m looking at you, Epic.

That’s when I discovered the Game Bar. It’s triggered by a keyboard shortcut while you’re in another app, so I started up Photoshop Elements, or maybe it was Windows’ Photos app or Luminar... it doesn’t matter. I hit the shortcut, and instead of the familiar grey overlay sliding in, I was faced with a question: “Is this a game?”

I don’t know how the Game Bar detects whether you’re playing a game or not. Perhaps it knows if you’re in fullscreen mode, or running a different resolution to the desktop, or perhaps it has a list of games built in like the Windows XP firewall did. But if it comes across something it doesn’t recognise, it asks. And if you say yes, it runs perfectly. And if you say no, it then it exits.

The Game Bar is innocent. The Game Bar believes me every time, even when I’m lying to its face. It can capture video of anything, but Microsoft says it must only capture games. So it asks about every app, with a tickbox to not ask again. Is this a game? Each time, I say yes. It’s like lying to a small child to get their cooperation in chores.

I almost feel bad about it, but the Game Bar only wants to help, and by letting it expand outside the limits of its original remit I’m giving it a gift, in a really weird way.

Photoshop is a game. Chrome is a game. Blender. The Control Panel. Any number of rotten shareware backup utilities I’m trying out. Anything I need screenshots of is now a game, and my hard drive fills with beautifully captured 1080p video of all these games. Why Microsoft wrote it this way is a puzzle. Why not have a way of capturing video of every app? Why limit it to games? Why make it so easy to use on non-games?

But then, with a recent update, the Game Bar has changed. It no longer asks, but hidden in its settings is a tickbox “Remember, this is a game”. It’s written in the way you might speak to a child, underlining the app’s apparent guileless personality. I still love you, Game Bar.

It’s official: magic wands are better than guns. Why shoot a bullet when you can shoot a bouncing ball of energy that dribbles fire everywhere? Noita lets you customise your own magic wands, so, if I wanted, the projectiles could fire in a shotgun spread, and the projectiles could be venom instead of magic energy. If I find the right spells and wand components I can shoot antigravity bolts that curve up toward the ceiling.

I’m not sure why I’d want to do that, but Noita gives me the option anyway, and that’s why I love it. It’s a 2D roguelike set in a cave system full of zombies, spiders, bats, flaming demons and, er, snipers with laser sights. Fluids and materials are meticulously simulated. Every pixel is affected by gravity. Wood smoulders, water flows, blood splatters, whisky goes up in flames. Your custom wands are little matchsticks that can set off extraordinary chain reactions. Sometimes they kill your enemies, often they kill you.

Noita lets you export gifs of these chain reactions so you can share your misfortune with the world. Players have been swapping scenes of spectacular physics-driven violence. One player equips a thunderstone to make them electrically charged. Then they shoot water-creating bolts and walk into the puddles to electrocute enemies. Another player finds a chainsaw and starts drilling down through the crust of the earth to reach the end of the level.

Noita has only just arrived in Early Access and should stay there for “about a year” according to the devs. It’s already good, but I’m excited to see new spell effects, creatures and secrets come into the game gradually. Early Access is a worthwhile experience for action roguelikes like Noita and Dead Cells. You get to enjoy the novelty of each new addition and watch the game evolve towards its eventual final form.

Noita is already full of secrets. If you journey to the left edge of the map at the very beginning of a run, you can propel yourself up to the branch of a tree. Digging around reveals mysterious tablets and an egg that hatches a giant worm. There’s plenty of room to add strange new events and secret zones. Noita would do well to look to Terraria’s array of bizarre boss monsters.

Personally I haven’t had much fortune myself in Noita’s depths, but the chance of finding a really killer wand keeps me coming back. I’m still experimenting with custom wands, applying extra caution after I accidentally blew myself up with a poorly chosen ‘explosion of sulphur’ spell effect. That casts at point-blank range, it turns out. The wand that fired out a spray of lit dynamite sticks also ended bloodily. Little by little I will learn my craft. The zombies of Noita will fear my mighty wands.