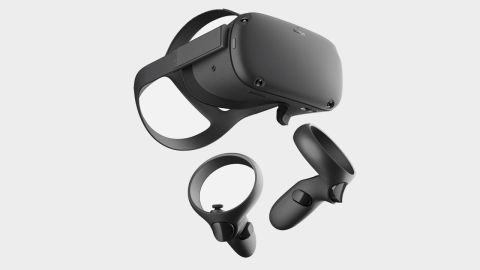 The Quest represents the next major step towards VR going mainstream, and while it's not a silver bullet, it's capable of delivering magical experiences you can't get anywhere else.

Virtual reality hardware has proven to be durable tech. While it hasn't hit the level of mainstream adoption headset makers crave, it has skated safely past that most dangerous period, the early few months or years that are a gaping maw poised to swallow novelty technology whole (pour one out for 3D TVs, folks). The next step is iterating in a way that makes VR more accessible to more people, and gets us closer to that promised virtual future we've been seeing in science fiction films for the last four decades. The Oculus Quest is an important first milestone in that direction and instantly one of the best VR headsets.

If you've ever played with a wired VR headset, like Oculus' Rift or Rift S, you're probably familiar with a condition I call "cable panic." It's that constant, nagging awareness of, and ever present fear of tripping over, the massive snake of cables running out of your headset and room-scale sensors to your PC. Cable panic gnaws at the back of your mind just enough to prevent you from ever being fully immersed in whatever VR experience or game you're sampling—it's been one of the most crippling stumbling blocks mitigating that sense of presence in virtual reality that devs and hardware manufacturers always talk about.

Quest, like its under-powered little sibling Go, dispels cable panic by totally eschewing wires of any kind. It's a fully standalone device with all the necessary hardware (other than a smart phone to dispatch with initial setup) packed right into the HMD itself. No powerful gaming PC, no additional processing box, no wires of any kind. Not only does this mean the barrier of entry is much lower than for most competing headsets (aided by the Quest's reasonable $400 starting price), it also makes playing games inside the Quest feel even closer to mind-bending magic than in previous HMDs. While I was initially concerned that lacking a powerful PC to drive experiences would result in seriously hamstrung games, the reality is that playing games in the Quest is nearly as convincing as playing them in the Rift S.

After a lot of hours spent in virtual reality, mostly in Oculus' other headsets, the novelty has largely worn off for me—I wasn't expecting much of the wow factor that a VR headset delivers the first time you strap it on from the Quest. I was therefore surprised and delighted by my first experiences with the Quest, largely because of the freedom a wireless headset affords you. Not only can you freely spin around and tilt your head without the encumbrance of heavy cables, the Quest also makes genius use of its passthrough cameras, which let you look through them and see your real world environment without removing the headset.

This is especially important for the Quest, because being untethered means you can take it anywhere. While it's an extremely odd, almost out-of-body sensation looking through the headset cameras in VR as though you were looking through your own eyes, after a little orientation period it begins to feel natural. You may be tiptoeing and carefully reaching your hands out to touch things at first (and I would never recommend using the passthroughs for any serious traversal), but after a few minutes I found I was able to walk around my apartment and out onto the back deck without the pressing anxiety of stumbling or banging into stuff.

It was extremely liberating, and the ease with which you can redraw the guardian space in any location makes the portability of the Quest pretty jaw dropping. You can take the Quest practically anywhere, and play games safely in any space where you don't mind having a giant black VR headset strapped to your face (and aren't likely to get robbed while you're shooting at space robots, oblivious to the world around you). The guardian feature works really well, too, only popping up contextually when you get close enough to it that you risk moving out of your safe space. While you're holding the controllers, it'll even show you when you're reaching through the borders of the space by way of a big, neon blue grid. Practically, this means that you can play games free of the worry that you're going to bash something with your flailing hands or trip over the edge of your loveseat.

By the numbers, the Quest is a significant hardware upgrade, at least in some respects. The resolution of the OLED display has been pumped up to 2,880 x 1,600 (compared to the Rift S at 2,560 x 1,440, or the original Rift at 2,160 x 1,200). There's virtually no screen-door effect unless you really squint, and while games don't look quite as sharp as on a Rift S powered by a monster gaming PC, the difference is pretty subtle.

As you'd expect from a purely standalone HMD, it's slightly heavier than the original Rift, but like the Rift S the Quest does a better job of distributing weight around the device so it's not uncomfortable to wear. Even after a couple hours of Space Pirate Trainer and Job Simulator the headset didn't feel like a huge burden (though wearing my glasses in it did leave me with some pretty noticeable lines around my eyes). The addition of a built-in microphone and open ear headphones are also welcome, especially since voice search is significantly easier than punching keys on the Oculus Home virtual keyboard.

The only significant drawbacks to the Quest are its limited games library and battery life. The major advantage of a standalone headset is somewhat crippled if you need to plug it in to charge it after two to three hours of use, though it does get back to full capacity pretty quickly (a little over two hours from totally depleted over a USB-C connection). While it's not hard to find games to play for two or three hours, the Quest's catalog isn't quite as robust as the Rift's—not every title crosses over, as you'd expect given the differences in hardware, and you can't access titles that live exclusively on Steam.

That said, you won't exhaust the Quest library any time soon, particularly if you haven't spent a lot of time with Oculus' other HMDs, and there are already a number of future, Quest-exclusive titles in the works. Some notable absences, like Google Maps and Street View (one of my favorite non-game apps on the Rift), have been replaced by decent approximates, like Wander. Wander draws on Google's data and allows you to drop into practically any place on the planet, and for exploring a possible vacation spot or reminiscing about some of your favorite childhood haunts, it's extremely powerful.

If you've been waiting to get on the VR bandwagon, or if you invested in a Vive or Rift and are exhausted with the nuisance of setup and wires, the Quest is an excellent value proposition. Even if you're still unsure about VR, you could certainly do worse with $400, and if you haven't gotten your hands on a headset, that initial novelty factor is stronger than ever. While VR is still waiting on its killer app, there's easily enough out there to justify a purchase, and as ways to wow your friends, family, and dinner party guests go, the Quest is second-to-none.

The Quest represents the next major step towards VR going mainstream, and while it's not a silver bullet, it's capable of delivering magical experiences you can't get anywhere else.