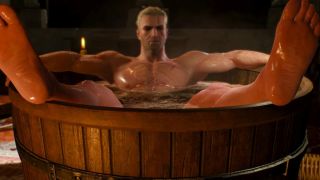 The Witcher 3: Wild Hunt presently has more concurrent players on Steam than it had on launch day in 2015, breaking its own record of 92,000 by several thousand players. At the time of this report more than 94,000 people were playing the game according to SteamDB, Steamcharts, and Valve’s own statistics. That puts it ahead of well-established free games like Path of Exile, Warframe, and Team Fortress 2. Further, the two previous games in the series are both in the top 100 games by player count on Steam, with The Witcher: Enhanced Edition at 12,100 and The Witcher 2: Assassins of Kings at 6,600.

These figures are for Steam only, and don’t count players from other distribution platforms like Witcher developer CD Projekt’s own GOG. Most highly-anticipated games never again reach their launch day concurrent player counts, especially single-player ones, so this number is particularly impressive for an RPG. This remarkable success follows last week, when The Witcher 3 surpassed Red Dead Redemption 2 in concurrent players.

The burst of interest in The Witcher is likely due to a combination of the new Netflix series, based on the same books, and the current sale discount on the game—the lowest it has ever been at $11.99 for the base game or $14.99 for the game and its expansions. Those two factors, amplified by the holiday break in Europe and the United States, have made for impressive numbers for the nearly five year old game.

Just imagine time traveling back to 2007 and telling someone that the odd Polish game series with the sexy trading cards was going to become the most successful RPG in the world.