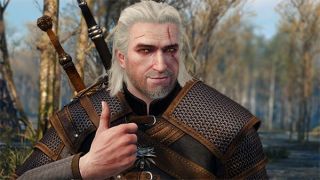 While Geralt has been getting into trouble and ruining all of his clothes in Netflix's The Witcher, his digital counterpart has also been going on his fair share of adventures. Presumably spurred on by the TV show, around 30,000 people are playing The Witcher 3  on Steam right now, with a peak of around 50,000. That's the same as Red Dead Redemption 2.

Steam Charts and SteamDB don't agree on the exact number, but they both report a significant jump over the last week and one of the highest player counts since it launched. Not bad for a game that came out nearly five years ago (yes, that long), especially one that doesn't have any multiplayer. GTA 5, which launched on PC just before The Witcher 3, boasts even more players, but it has the advantage of GTA Online and never seems to leave the Steam charts.

When you include the Epic Games Store and players who bought it via the Rockstar Games Launcher, Red Dead Redemption 2 likely has a lot more players in total, but it's still a big leap for a game that has lately averaged around 15,000 players.

I finally finished Death Stranding, so I'm in the market for another massive game, and I can't deny that returning to The Witcher 3 has crossed my mind. I reviewed it and the expansions when they launched, so it's been a while. Then again, I got a really satisfying ending and an arc that felt very fitting for Geralt, so another playthrough would be a bit like messing with perfection. I'll probably spend another day agonising over it before I just buy the Switch version and vanish for a month.

Have any of you lot started playing again because of the show, or even for the first time? Regale us with your adventures in the comments.