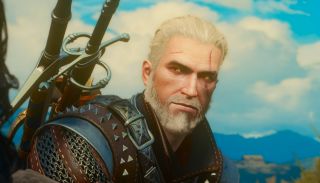 When I first played The Witcher in 2015 it was already laughably dated. Compared to The Witcher 3, which I was preparing to play on its launch day, The Witcher was a relic of the past, with naturally less detailed character models, a frustratingly capricious interface, and interesting but clunky combat. The most dated aspect of all, though was its approach to sexuality. Geralt's sexual pursuits are easily a shoe-in for "most improved" between The Witcher of 2007 and The Wild Hunt of 2015.

I quickly took to calling Geralt the James Bond of fantasy. He's one of only a few of his kind with a specialized set of skills. The lonely honor of being so good at what he does has turned him into a grizzled pessimist who seeks brief moments of rest between deadly encounters beneath the skirts of any woman in sight. The Witcher makes no effort to hide its opinions on sex. Any woman that Geralt manages to get horizontal with rewards me for the accomplishment with a playing card, featuring pinup art of my paramour in a state of undress.

They are gaudy, hedonistic evidence of Geralt's amorous "conquests" and in spite of myself, I love them.

My greatest shame in The Witcher was that I didn't manage to collect each and every one of those "romance" cards because I failed to protect a potential lover named Vesna Hood during an escort quest in the early hours of the game. If I'd managed to save her in the outskirts of Vizima, she would have suggested a late-night picnic in an old mill nearby. Poor Vesna was killed by barghests and Geralt never got to know her better.

The Witcher's "romances" are mostly short, cynical trysts like Vesna's, though she is one of the lucky women who has a real name instead of a title. Obtaining a collectible card from each woman is transactional for both Geralt and for me. In-game, most of Geralt's sexual partners want something from him before checking out his third sword. The unnamed "peasant woman," or "the gossip," and others all simply want gifts like flowers or a ring. The prostitutes want money, of course. More fleshed-out characters with their own sidequests often have caveats. Princess Adda needs an offering of raw meat and The Queen of the Night is simply glad you didn't kill her.

For my part, it's hard not to turn these romance cards into a game of "gotta catch 'em all." They may reduce every woman in the game to a novelty item but as a player I can't deny how, just like every other kind of collectible, I immensely enjoy digging through a wiki to make sure I'm doing each quest properly. I don't want to miss one. I refused to repeat the mistake I made with Vesna, so I made sure that when it came time to meet with another woman named Rozalind Pankiera that I'd accepted a prerequisite quest first to avoid getting locked out of her sexual exploits.

The Witcher does attempt to do right by the two romances that span multiple in-game acts with Shani or Triss Merigold. Both enjoy special status in a very small group of women with custom 3D cutscenes preceding the reveal of their romance card. Unfortunately, though, some combination of writing, acting, and animation still gives away the game's age. Despite Triss and Shani's importance, they still wind up feeling more like collectibles than characters.

Jumping from The Witcher to The Witcher 3, with its vastly superior character models, voice acting, and combat were not the only bits to give me whiplash. The Witcher went from vending machine women dispensing pinups as rewards to beautiful characters with backstories and love scenes pulled from romantic dramas.

The Witcher 2, released in 2011, functioned as a strong but cautious step towards the romantic epics of Wild Hunt. Geralt's casual encounters still mostly focus on this-for-that arrangements with unimportant sidequest characters or on opportunistic flings. Never one to miss out, I absolutely allowed Mottle the elven woman to "thank" Geralt for his heroism in Act 2 and accepted recompense for saving a succubus in the only currency that succubi apparently trade in. Both are just convenient rest stops off the main relationship highway.

The real marquee romance of Assassin of Kings is with Triss, who gets an entirely bespoke and spicy sex scene in an underground bath. The second Witcher game attempts to set Geralt's relationship with the redheaded sorceress above the rest, though it's hard to buy into the narrative or emotional significance of Triss's romance when the other "romances" are largely treated as completely throwaway. Geralt's dalliances with Ves the swordswoman or with Cynthia the spy do set the course for Wild Hunt where the white wolf's sexcapades are with women more often his equal.

Geralt's pursuit of sex in Wild Hunt is much more mature than the original and even Assassins of Kings. Mature in the sense that there's a lot more nudity on display, but also because it's more emotionally mature.

That doesn't mean that Geralt has given up on one-night stands. Far from it. He can still enjoy the company of women in brothels. Even his reunion with Shani in the Hearts of Stone expansion is relegated to one moonlit night in a rowboat. Even so, Wild Hunt's approach to romance focuses almost entirely on women with whom Geralt has lots of shared history. He knows Shani, Kiera, Triss, and Yennefer intimately—even outside the bedroom.

The Witcher 3, without doing away with the saucy aspects, reframes Geralt's sexual encounters as a shared moment between two imperfect people rather than just a notch in Geralt's imaginary bedpost. Even the characters that Geralt only meets briefly, Jutta An Dimun the swordswoman and Madame Sasha the Gwent master, have their own stories and motivations.

Madame Sasha in particular, though only a brief stop along Geralt's path, is more than she seems. After meeting at a Gwent tournament and conspiring together to steal the prize money, Sasha's true identity as a Nilfgaardian spy is revealed. The gold is her ticket home and Geralt her convenient tool for acquiring it. After a bumpy but successful heist, Sasha invites Geralt upstairs for the night. By morning the only trace of her is a note left behind. She's returned to her own main quest and Geralt was as much a conquest of hers as she was his.

In The Witcher, the majority of Geralt's lovers are akin to furniture. They have a single purpose that entirely revolves around his use of them. Morenn the dryad relents to Geralt's advances with the gift of a wolf pelt. The vampire Queen of the Night bestows a foursome with her fellow vampires on Geralt after a single conversation for the favor of not killing them. With Rozalind Pankiera, Geralt cleans up after his friend Dandelion's mistakes by retrieving the bard's lute and enjoying a bit of time with the woman himself.

Each of them, in theory, have their own stories and history but that the player never sees any of this gives them a different tone from Wild Hunt. It's a matter of proportions. Despite having an ongoing relationship with either Triss or Shani, those more meaningful encounters are bedmates with a slew of forgettable trysts. In Assassins of Kings as well, Geralt's possible feelings for Triss are undercut by a small handful of women who won't have any permanence in his life.

In Wild Hunt, Geralt still has plenty of casual sexual encounters alongside his long-term connections with Yennefer and Triss. Unlike The Witcher though, each of these women has her own purpose that the player is able to see. They join Geralt on his side quests, almost always fighting alongside him, instead of quickly dispensing a quest and then awaiting the input of a gift before proceeding to bed him. The Wild Hunt making each of Geralt's lovers his equal, or closer to it, is the most important romantic change as the series matured.

I have a fondness for the simplicity and tackiness of The Witcher's romance cards that I'll never deny but I see so much growth in how Geralt's sexual encounters are shown in Wild Hunt. Without changing Geralt's character at all—he is still absolutely the fantasy James Bond—Wild Hunt gives Geralt's lovers their own stories. They are warriors, spies, gang leaders, and sorceresses with their own concerns that just so happen to intersect with Geralt's at moments opportune for a bit of fun. Let's face it, romance in Wild Hunt is sexier too, thanks to its bigger budget and newer tech. Everyone wins.