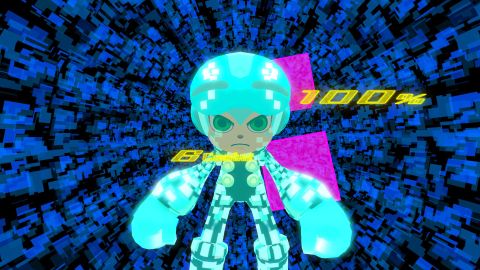 I haven’t rage quit a game in a very long time. That is to say, I hadn’t until I played Mighty No. 9. Touching the imprecise hitbox of a boss’ insta-death attack to take my last life and send me all the way back to the start of the course (for the third time) is about as mad as I’ve ever been at a game. It’s not that I couldn’t “git gud,” it’s that even when you are gud, Mighty No. 9 makes playing it more frustrating than fun. And though there’s a nugget of pure joy at its core, that only serves as a reminder of the game this could have been.

Mighty No. 9 is Mega Man producer Keiji Inafune’s spiritual successor to the series that made him famous, meant to evoke the spirit of those classic Mega Man games but evolved and adapted for the modern era. You run to the right, shooting lemon-shaped bullets at your enemies while traversing platforms and obstacles. But the main character, Beck, has an ability Mega Man never had: shooting enemies weakens them, but you have to dash through them to finish the job, absorbing their “Xel” energy in the process.

While that mechanic is a relatively large departure from Inafune’s other games, it’s a very fun twist on the Mega Man formula. Mighty No. 9 becomes a game of learning exactly how many hits each enemy can take before I can dash through them, and flowing through a level at high speed is satisfying. While the jumping and the dash didn’t feel as precise as I would like, I was surprised by how much I enjoyed learning enemy patterns, level layouts, and boss attacks and then using the tools I’ve been given to best them all as efficiently as possible.

Unfortunately the environments you use those tools in are, for the most part, frustrating and ill-conceived. The level design in Mighty No. 9 is boring at the best of times and an absolute sin against video games at the worst. They are filled with a relatively small cast of enemies for the entirety of the game’s roughly four-hour duration. Glowing pink objects (usually spikes) that would instantly kill me are plentiful and frustrating. Hidden or divergent paths are scant, and the ones I did find would usually just skip whatever obstacle its entrance was hiding before. And occasionally I was presented with a design choice so flabbergasting I couldn’t believe it made it into the final game.

In the Power Planet level,  I fought my way through the course until I reached a spot with no clear way to proceed, my path blocked by a large pink insta-death turbine with only a small gap below it. Confused, I hesitated for a few seconds before a message popped up on my screen: “use the Crouch Dash.”

It was at this moment I realized Mighty No. 9 was the Mega Man game Egoraptor so eloquently tore apart in his fantastic Sequelitis video five years ago. The game presented me with level design so poor that developer Comcept knew ahead of time I wouldn’t understand what to do. Then Comcept decided the right way to fix this glaring error in the course’s layout was a pop-up message handing me the answer. This moment of Mighty No. 9 should be immortalized in the level designer’s bible, simply labeled “DO NOT DO THIS.”

Not all of the levels are this offensive in their design, but when they’re not frustrating they’re usually uninteresting and repetitive. In the Capitol Building level I chased a sniper robot named Countershade back and forth through a series of long hallways. I was forced to run through the same parts of the level multiple times, each less fun than the last, and for some reason this was the only course with no checkpoints. When I finally caught up to the boss, he was protected by pink insta-death electrical wires stretching from floor to ceiling that would turn on and off. Tap one on the final leg of the level? Start over from the beginning. In the Mega Man games, deaths like this always felt like they were my fault, like there was something I could have done better. But in Mighty No. 9, they feel like cheap shots caused by overuse and forced repetition.

And I could only look at Mighty No. 9’s bland visuals so many times over. The game looks dated in the worst way. Everything is polygonal and low detail, cutscenes are barely animated with voice acting that will make your eyes roll back in your head, and it all ends up feeling like this is some early draft of the game that was shipped by mistake. The fire and smoke particles are the worst of the bunch, with explosions looking impotent and unthreatening. An early cutscene shows an overview of the city on fire, and it’s hard not to notice that the dozen or so pillars of smoke coming from different buildings are all identical animations copy and pasted across the landscape. And while the character designs of Beck and the bosses were interesting as concept art, their translation to 3D models mostly feels lifeless and flat.

It’s possible to ignore a game’s graphics if they don’t get in the way, but Mighty No. 9’s 2.5D animation and ugly particles have gameplay implications too. These muddy visuals mean hitboxes can be incredibly unclear. The first boss in the lineup (although, like Mega Man, they can be attempted in any order) is a fire robot named Pyrogen. He has an explosive attack that’s easy to see coming, but surprisingly hard to avoid because the edge of the ability is so obscure. It was nearly impossible for me to tell where the flame effects would stop, and that lack of clarity meant I took more cheap shots than I care to remember. Pyrogen was also one of a couple bosses whose second form has an insta kill move. Because that’s also fun.

The frustrating part about Mighty No. 9 is that its bosses and enemies did remind me of Mega Man, but Comcept’s poor design choices mean it resembles a fan project more than a spiritual successor. The final boss of the game (no spoilers) was challenging but understandable, and I could feel myself getting better each time I fought it, just like classic Mega Man. But the wonky hitboxes and imprecise graphics made that challenge aggravating instead of motivating. This isn’t a fun sort of challenge where losing is part of the experience, it’s an enraging one.

As for performance, the PC version of Mighty No. 9 ran well enough for me, only occasionally dropping frames when I rarely dashed into groups of four or more enemies at once. I did have an issue with the game’s borderless windowed option, which didn’t function correctly on any of the rigs I tried it on. The worst problem on PC is the controls, as the game clearly wasn’t made for a mouse and keyboard whatsoever. Even if you don’t have a gamepad plugged in, all the tutorial messages and button indicators use the icons for an Xbox controller, so I had to check the keybindings menu to even learn how to play—and by default, shoot and dash are awkwardly mapped to left and right click. I ended up using an Xbox 360 controller for nearly the entire time I played.

What we’re left with is a whole lot of missed potential. Mighty No. 9 presents an interesting evolution on the mechanics of one of the most beloved series in video games, but then completely stumbles on building a quality game around those mechanics. There are surely moments to be enjoyed here, but they’re hidden in the nooks and crannies of downright infuriating level designs and unappealing art. The Mega Man fan inside me revelled in those fleeting moments, while mourning the game we all hoped this would be.

Tom Marks
Tom is PC Gamer’s Associate Editor. He enjoys platformers, puzzles and puzzle-platformers. He also enjoys talking about PC games, which he now no longer does alone. Tune in every Wednesday at 1pm Pacific on Twitch.tv/pcgamer to see Tom host The PC Gamer Show.
See comments
PC Gamer Newsletter