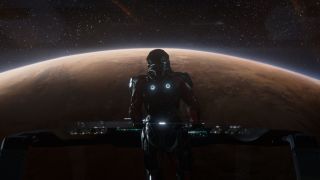 As spotted by Eurogamer, Reddit users have a theory about the protagonist of the upcoming Mass Effect Andromeda. A "resident news specialist" called Benelioto has cropped an image from the short video that EA released on N7 Day (November 7) this year that shows a dog tag on the dashboard of a spaceship.

The tag appears to read Ryder, and the Reddit user points out that this may be a reference to Sally Ride, the first American woman in space (a feat she achieved in 1983 at the age of 32, apparently still the youngest age at which an American astronaut has travelled to space). It would create a series tradition, as Commander Shepard is named for Alan Shepard, the first American to travel in space.

Watch the trailer again above to check the moment out for yourself. It begins at around 00:43. Even if the protagonist doesn't end up with the name Ryder, it doesn't hurt to start thinking of first names that sound good - what would you call your next commander?