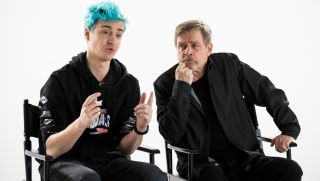 Over the weekend, Epic and Disney released a new trailer for Star Wars: The Rise of Skywalker in Fortnite. After that came a Star Wars glider, a lightsaber, and TIE Fighter crash sites to explore and reclaim. Later this week, the Star Wars content crossover will move into a whole new dimension, as Mark Hamill will join with Ninja to show off more in-game content.

Christmas wish in 3, 2, 1… Wait until you see what @Ninja and I have planned with @FortniteGame and @Xbox on Thursday. It’s going to be….Amazing! (and I’ll try not to make a fool of myself) #XboxPartner pic.twitter.com/A9SddlqV4SDecember 16, 2019

Xbox Sessions, if you haven't run into it previously, is a series in which celebrity guests show off their top-tier gaming skills: Previously, for instance, Anderson Silva played Fallout 76, RZA played Gears 5, and Todd Gurley played Madden NFL 19

It's quite a pickup for Epic, which certainly seems to be making the most of that Star Wars licensing deal. It's not actually specified in the clip, but I'm taking it for granted that the "new content" will be related to the ongoing Fortnite/Star Wars crossover that's been unfolding ahead of the release of The Rise of Skywalker on December 20. After all, you don't invite Mark Hamill onto your show to showcase his hot gaming skills. (I'm sure he won't be notably worse than Ellen, though.)

Ninja tweeted a few behind-the-scenes shots of him and Hamill sharing some moments yesterday.

Being able to work with one of the greatest legends @HamillHimself and getting to teach him about our gaming world was such an honor. He also taught me a lot about voice acting, super memorable moment. pic.twitter.com/k6ATQxmCn7December 15, 2019