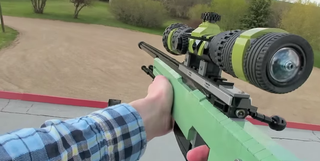 Every highly-specific hobby you can imagine has a dedicated home on YouTube. Backyard metallurgy. 46-minute marathon Kinder Egg openings. Children in suits evaluating junk food. YouTuber ZaziNombies makes Lego game guns, and he's pieced together everything from the Scout's Force-A-Nature to a whole series of zappers from Destiny.

Joining that armory this week is Counter-Strike's iconic long gun: the AWP. ZaziNombies used about 1100 Lego pieces to put together a four-foot-long facsimile, including a convincing reconstruction of the AWP's optics that's mostly tires. You can tell he's done this before. The color is more mint than the AWP's classic olive drab, the plastic rounds seem smaller than the .338 Lapua that AWPs allegedly shoot, and the trivia ZaziNombies rattles off is clearly from a Wiki, but otherwise the resemblance is striking.