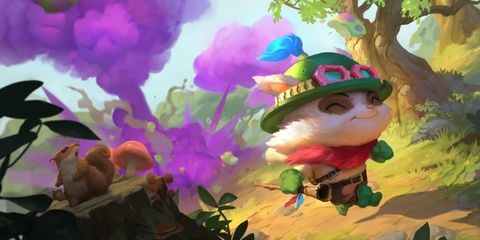 Clever innovations and a generous economy make Legends of Runeterra easy to love.

What is it? A free-to-play card game based on League of Legends.
Expect to pay: Free
Developer: Riot Games
Publisher: Riot Games
Reviewed on: i7 7700, RTX 2070, 16GB RAM
Multiplayer? Yes
Link: playruneterra.com/

I don’t think I can stomach buying another booster pack after playing Legends of Runeterra. It’s a necessary part of physical card games where cards often have real-world value, but their prevalence in digital card games is just an excuse to sell the worst kind of lootboxes. It’s enough to make anyone cynical. But thanks to a generous reward system that avoids booster packs altogether, Legends of Runeterra is one card game that’s easy to love.

You can be forgiven if you roll your eyes at the thought of a free-to-play card game based on League of Legends. The card genre is full of these spin-offs, but Riot Games’ take is full of clever innovations and tense duels dictated by your skill rather than how much you spend.

With its colorful aesthetic and good-natured charm, it’s easy to mistake Legends of Runeterra, which entered open beta last month, for a Hearthstone knock-off. It takes the familiar faces of Riot’s enormously popular MOBA and adapts their playstyle and abilities into a game where your primary objective is to build decks and play cards to reduce your opponent’s hit points to zero. Though it walks like Hearthstone, Legends of Runeterra talks like a simpler version of Magic: The Gathering. That’s to its benefit, as Runeterra avoids cribbing many of Magic’s cumbersome rules in favor of faster, more aggressive duels.

For example: there's no summoning sickness. Freshly placed creatures (called followers or champions) can attack immediately after being summoned and aren’t tapped out after, letting them still block during your opponent’s attack phase. It virtually guarantees that every turn both sides will take losses, making those clever plays where you bait your opponent or save a unit from dying feel extra rewarding.

Like Magic, though, my opponent always gets a chance to respond after I make a move. It’s hilarious (and devastating) to cast Deny thinking I’m about to cancel my opponent’s fatal spell only to have them cast Deny on my Deny. I really enjoy the back-and-forth of Runeterra’s battles.

When interactions between cards get complicated, Runeterra has a clever feature called the Oracle’s Eye that shows you what the board will look like after a certain attack phase or spell has resolved. Not having double-check your math or worry that a certain chain of abilities and spells plays will play out a certain way is a godsend.

Some genius twists to combat further distinguish Runeterra from the pack. Most card games, for example, punish me for not spending all your mana in a given turn. In Legends of Runeterra, however, up to three points of my unspent mana are preserved for the next round to be used exclusively on spells. This one change feels as substantial as The Elder Scrolls: Legends having two separate playing boards. Being able to play cards on a turn where it should be impossible to play them because I stored mana earlier is one obvious benefit, but I also like that I’m not as harshly punished by a bad opening hand. It keeps Legends of Runeterra feeling unpredictable and dynamic, instead of one player snowballing due to bad luck.

By far the most unique part of Legends of Runeterra’s combat are champions. Each of the initial set of 24 is modelled after a character in League of Legends, adapting their playstyle to fit inside the rules of a card game. Braum, for example, regenerates health and gets to choose which enemy unit blocks him, making him a great tank. Each one also levels up after meeting certain conditions, often gaining more power and new abilities that make them formidable.

Champions are often more powerful than regular followers, but they’re far from some kind of game-winning trump card. Knowing when to play them and how to keep them alive is especially rewarding because you just know your opponent is doing everything they can to kill them. With champions in play, Runeterra feels like a true battle of wits, each player trying to outsmart or bait the other. It’s satisfying as hell to trick an enemy into a position that levels up your own champion or destroys theirs.

Champions also add welcome flavor to well-understood deck types. A control deck loaded with spells that stun and force cards back into your opponent’s hand becomes far more sinister when paired with Yasuo, who deals damage to stunned or recalled units. If you pull that trick off six times and level him up, he’ll start killing stunned units outright. It’s terrifying.

Even if you’re not a big fan of League of Legends, its charming cast of anarchist nutjobs, stoic samurai, and horrifying specters bring so much life and humor to each battle. I love hearing Jinx laughing maniacally when I use one of her related spells to destroy an enemy unit, or seeing my adorable Lonely Poro transform when I summon another Poro unit. The card art is often so pretty that I frequently sneak a peek using the inspect button during my opponent’s turn.

As nice as the art is, the layout of the main menu and deck builder could use a lot of work. Information is poorly laid out and feel, forcing me to navigate to menus just to get information I need when trying to build a deck. It feels like it was developed for mobile, with oversized buttons and interface elements. It’s beyond annoying that I have to go to the Store window just to see what crafting resources I have, or that there’s not better options for sorting and organizing my collection.

Though its combat is a lot of fun, where Legends of Runeterra sets a new standard is in its economy and rewards. Booster packs are gone entirely—good fuckin’ riddance—and replaced with a layering of weekly chests and several free battle passes that constantly dole out crafting materials, cards, and Wildcards, which can be redeemed for any card of a corresponding rarity. Being able to pick which cards I want to add to my collection is refreshing. Though rarer Wildcards come infrequently, I’ve already built a few decks that feel powerful and highly competitive instead of cobbling together whatever I can.

Earning the maximum amount of possible rewards each week isn’t a brutal grind either. Playing a few hours every day, completing quests and Draft modes, puts me close to capping my rewards, but I could easily play much less and still reap some good loot. Hardcore players might lament running out of things to do if they invest too much time, but I’m happy that a competitive game from a major publisher, for once, isn’t trying to take over my life.

Shuffle through some Legends of Runeterra guides

Since launch, I’ve played in Ranked mode almost exclusively. Though I’ve lost more than I care to admit, I’m motivated to keep playing because fights almost always feel fair—even if their deck is much better than mine. It’s one of the less obvious benefits of not being overtly pay-to-win like pretty much any other card game. You can still buy Wildcards, but there’s has a weekly cap on them so even hardcore spenders won’t outpace us filthy casuals. It’s fantastic. Duels feel like a true test of strategy (and a little luck) instead of who is playing the most expensive meta deck.

Even Legends of Runeterra’s Draft mode, called Expeditions, is overly generous. Like most Draft modes, in order to play you have to spend either a few dollars, spend a draft token you earn from various rewards, or surrender a large sum of crafting resources. But Runeterra’s Draft mode lets you play twice per entry, building a new deck each time and then using whichever run was more successful to determine your rewards. Even if you do terribly, you’ll still receive a champion card equal to the value of your admission, but winning all seven games showered me with several very rare cards and more than enough crafting resources that I was immediately able to Draft a second time.

It’s exciting to play a card game with so few barriers and so little segregation between its players. And because I don’t feel like a filthy, second-class casual for not buying cards, Legends of Runeterra has quickly wormed its way into my daily routine. Though its deck building menus could use a lot of work, Legends of Runeterra is a welcome alternative in a genre where how competitive you are is too often related to how much money you spend.

Clever innovations and a generous economy make Legends of Runeterra easy to love.