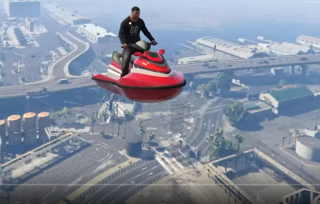 This week on the Mod Roundup, turn anything in GTA 5 into a rocket using modded boosters from Just Cause 3. Plus, a Half-Life mod from 1999 finally arrives on Steam, and it lets you play Half-Life in co-op mode even if your friends don't own the game! Also, a Fallout 4 mod lets you build walls with windows, and a mod for Cities: Skylines makes your citizens actually follow a schedule.

Here are the most promising mods we've seen this week.

Sven Co-op didn't pop up just this week—it's been around since 1999—but it is now on Steam. The mod lets you play an enhanced version of Half-Life with new weapons and features, a bunch of new maps, and you can play Half-Life as a co-op game as well as, even with friends who don't own it. Of course, it's free. If you haven't tried it in the past 15 years, now's a great time.

"Crapshack" is the word I'd use to describe every single building I've crafted in Fallout 4's settlements. Now matter how carefully I put them together, they always look like crap. What's worse is that when I'm inside one of my crapshacks I can't even look out—I'm stuck staring at the crappiness of the interior walls. This mod lets you choose from a whole bunch of nice-looking walls with windows so you can look out of them at something less crappy.

Just Cause 3 Booster Explosives, for GTA 5

Just Cause 3 and GTA 5 are two of the most destructive games out there, so naturally sticking them together and lighting the fuse seems like a good idea. This mod lets you attach JC3's explosive boosters to vehicles, animals, and people, and let 'em rip. What's that? Can you be sitting in the vehicle at the time? Yes. Yes you can. No need for planes, now you've got a rocket car. The gifs on this page are from DexModderFTW's demonstration video.

If you're not really feeling the whole day-night cycle thing in Cities: Skylines, this mod is for you. Citizens will actually take heed of the time of day: kids will actually go to school in the morning and come home at night, roads will become much busier during commute times, and visiting tourists will retreat to their hotels after dark and head back out in the morning.