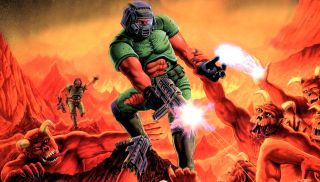 It's been more than two decades since id Software founding member John Romero created a level for the studio's world-changing masterpiece Doom. But now he's made a new one.

"After exiting the Computer Station you knew the worst was up ahead. You still hadn't reached the place where the demons were coming from," the included text file says. "The steel door shuts behind you as you realize you're there; you're at the Phobos Anomaly. Cracks from hell are all over the place as seepage from the portal invades the entire installation. Now it's time to find the portal and stop the demons from coming through. You know UAC had hundreds of scientists working at a high-tech lab somewhere in this area, and the portal must be connected to it somehow. Time to lock and load.”

I haven't played it yet, but based on comments on both Twitter and Facebook, it's a tough one. Coming from the man himself, I'd expect no less.