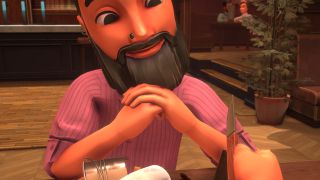 I'm on a date with a bloke called Callum. He has a beard. We're in a steakhouse, and there's a blowtorch on the table. The kind you'd use to make a baked Alaska, or finish off a crème brûlée. I ignite it and point it directly at Callum's beard. But Callum doesn't seem to mind the 1500°C blue flame pointed directly at his chin. He just stares ahead, emotionless. As do I.

Later, I'm on a date with a woman called Megan. She orders the steak, which I immediately grab from her plate and throw on the ground. She doesn't care either. She just stares into space, smiling.

I'm playing Table Manners, one of those comedy physics games that seems designed purely to be featured in YouTube videos. In the vein of seven-year-old novelty title Surgeon Simulator, you control a clumsy physics-enabled hand and must impress a partner on a date. You do so by salting their fries, pouring their wine, and feeding them dessert.

You feel more like a waiter than someone on a date, and to 'pass' each encounter you have to perform a series of these menial tasks until the person across the table is satisfied. Now that you've read this paragraph, you don't have to play it. Simply imagining playing Table Manners is functionally the same as actually getting your hands on it.

I actually think the game has a great premise, and could have been a lot of fun if the person you're dating actually reacted to your antics in a meaningful way. Sometimes they angrily cross their arms or screw their face up, but in general they don't seem to care what you get up to.

I didn't go into this with a cynical mind. I was well up for some anarchic, Fawlty Towers-esque slapstick. But Table Manners is just kinda boring, honestly. The hand isn't fun or satisfying to control, and the actual tasks themselves are deeply uninteresting. And I didn't laugh once. Not even a sharp exhale through the nostrils. Nothing.

The colourful art might lead you to believe that this is a game buzzing with fun and humour, but it's surprisingly dull in execution. When physics simulation was a relatively new concept, there was inherent entertainment in knocking objects around and watching them topple over. But now that just isn't enough to base an entire game around. I'd say the joke wore thin, if there was one.

If you really want to play Table Manners, it's available on Steam now. But you should probably save your money, even with a 20% Valentine's Day discount.