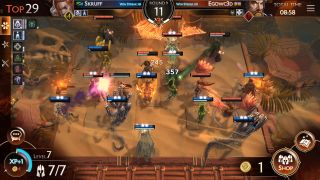 Might & Magic: Chess Royale is an autobattler with a difference. While a handful of major studios have already tried their hand at the genre, Ubisoft’s effort introduces a few twists to the commonly-accepted formula: Chess Royale is not only faster, but the stakes of each round are significantly higher.

To help you get up to speed, this guide goes over the basics of the genre and outlines a few strategies that will help you secure your first-place finish.

If you’re already familiar with autobattlers like Teamfight Tactics or Dota Underlords, you should find Chess Royale relatively familiar. If you’re new to the genre, it’s worth going over the basics how to play.

At the start of each match, you create an army by placing units on your side of a six-by-eight square grid. Once your army is in place, you’ll be matched against another player, and your units will fight. During the battle, neither player has any control over their chosen characters. Instead, units automatically hit each other with basic attacks until they have generated enough mana to use their unique ability.

The two armies continue to fight until one wipes—on rare occasions, particularly long matches can end in a draw—and the defeated player loses one of their three lives. Both players gain gold and experience. Experience is used to increase the size of your army, and one experience point can be purchased for two gold. As well as experience, gold is used to purchase more units, and shuffle the selection of units available for purchase in the store that appears between rounds.

Units can be levelled up by purchasing multiple versions of the same type - three level one units makes a level two, and three level twos (i.e. nine level ones) makes a level three. Each character also has a cost from one to five, a type which declares whether it’s a tank, support, or ranged or melee DPS, and two synergies. Building an army with multiple units of the same synergy activates bonus effects—like extra armour, increased damage, or even resurrected units—that are key to swinging battles in your favour.

Most autobattlers tend to be last-man-standing affairs, and while Chess Royale’s 99-player matches are bigger than most, each game ends when all but one player has lost all three lives.

Getting started in Chess Royale

Many autobattlers tend to start off with a number of Carousel or PvE rounds, which grant players the items, gold, and experience to start building their army. Chess Royale, however, drops you straight into a fight against another player. While you won’t lose one of your three lives if you lose this first round, it’s important to start building an effective army as quickly as possible.

At the start of round one, every player is level two, which allows them to play up to two units at once, and is given four gold before being shown a store featuring a random selection of five first and second level units.

At this early stage, the best approach is to buy more than one of the same thing. Five of the game’s 12 synergies can be activated by just two of the same units, so matching up symbols can be a useful head start. If that’s not possible, buy duplicate units. It’s possible to get a level two one-cost unit, but even if you can’t upgrade straight away, spare units can be stored to the side of your board until you’re ready to upgrade them, which sets you up for future rounds.

For the first five rounds, your focus should be on acquiring more powerful units. The first few players are knocked out after round four. If you’re still around by then you’ll be rewarded with extra gold, which can be used on developing synergies and increasing the size of your army.

It’s important to remember that whether you win or lose a round, you’ll get one experience point and a small amount of gold—bag bonus gold by surviving longer past certain thresholds and for knocking out other players, it's not awarded just for winning a round.

More XP means a bigger army, but don’t just funnel money into having more troops: upgraded units are worth more than the sum of their parts, so prioritise levelling up your units and building synergies, and only put money in the XP bar when it’ll improve your army straight away. If you’ve got money to spare, repeatedly shuffle the shop: if you want to acquire new units, you’ll have to pay, but the key to a successful army is more upgraded units and more synergies, so it’s worth investing extra money to find the characters you need.

As you progress you’ll get access to spells that can passively empower your army. Different tiers of spells unlock at various stages of the game, but a maximum of six are available at any one time. While spells can offer powerful boosts to your armies, many offer bonuses to specific unit types or abilities, so only use money on them if they’ll benefit your existing units.

Unit placement is key. It’s generally a good idea to put weaker units towards the back of your army and tanks on the frontline, but be aware that some character abilities can be more beneficial in different places. For instance, Dragons grant mana to nearby allies, while Dryad heals in a circle around her, so put them in the centre of the pack. Assassins like Harpy can cover a lot of ground to pick off weak enemies, so place them far away to draw aggro from opponents before evading.

Remember, you don’t have any direct control over your army, so luck plays a crucial role in deciding the match's winner. That said, you can set yourself up for victory with a little careful planning and savvy spending.