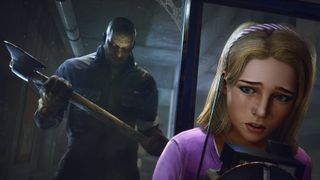 Welcome back to The PC Gamer Show, our weekly podcast. You can watch the show live on Thursdays at 9 am PDT on our Twitch channel, or after the fact through any of the links below.

This week's episode is a little different. I'm joined by Justin Vasquez, executive director at Elastic Games on Last Year, to talk about how the sudden closure of the Discord Store drastically altered the future of what was meant to be one of the shop's flagship titles. Last Year is a 5v1 teens versus monster horror game deeply rooted in B-movie aesthetics. It's a charming and unique take on asymmetrical competition that I personally prefer to the easy but not entirely accurate analogue Dead by Daylight.

Last Year hasn't had the easiest time standing out. Shortly after launch on the Discord Store, the future of the game became unexpectedly precarious when the shop suddenly closed. The team went dark for months, much to the dismay of their busy Discord community, but Elastic Games has since found a new direction and road map for its debut. And more importantly, a new home on Steam.

Vasquez takes me through the moments the Discord Store shut down, the trouble of maintaining healthy communication with a fervent community, keeping up team morale in a difficult time, and the new shape and direction of Last Year.

Here's an excerpt from the interview where Vasquez details the early days of signing to Discord and first notice of the closure. For the whole story, listen to this week's episode of The PC Gamer Show.

Justin Vasquez, executive director: Well, yeah, at the time, it really felt like the right move because before that, Elastic had really been just a handful of devs. It started off with just James [Wearing, CEO and director], the Kickstarter, and then James brought Alex [Halchuk] our technical director on, and it was just them for a long time. They'd bring on a couple of devs here and there to help them cobble together the demo, which eventually turned into the first playable level.

When I came on to the operation it was right around the time of Discord, and it felt like the right move because Discord shared a lot of the same philosophies and same values when it came to community, when it came to growing and supporting and communicating with the community. It was exciting to be part of something brand new. It's very rare that a new platform launches period, let alone a new platform on PC that's trying to go head to head with Steam, the major platform. And as you know, this was right before the Epic Games Store was even announced, and so for us, it felt like something exciting, something different, something innovative and pioneering. And the team at Discord was and continues to be very supportive of us.

It felt like the right fit both from a community standpoint, it felt like the right fit from a partnership standpoint and it felt like the right timing to get the first version of the game into players hands, because we had just basically polished up the second-to-second and the minute-to-minute experience, and we knew we had something visceral. But before we start building out hour-to-hour, to our experience, we really wanted to get the game into players' hands and know how they felt about it. Being a new platform, we knew that only the most hardcore of gamers would even be aware of it, and be attracted to it and be willing to try the game on a new platform. We felt, OK, that's going to be the perfect audience to give us that initial feedback.

In that sense, the launch was successful, because we did get a really engaged community who did really love the game and were very vocal about what they liked about it and what they wanted to see in its future and how it could evolve. But in all honesty, we did not see the drastic one-eighty that Discord would pull in shutting down the store only a few months into its lifespan. And so here we are.

PC Gamer: You say it was a drastic one-eighty—what kind of prep time or warning or did you get from Discord on that side of things regarding store closure?

JV: Discord is still a respected partner of ours and I want to stress that. They have always been good to us even in the decision that impacted us very harshly. So they did give us about a month and change of warning of 'Listen, we're not sure this is the right direction for the platform as a whole, we're thinking of migrating to this dedicated server model where people could still sell the games but only through their servers.' Then eventually they said, 'You know what, we're just going to stop adding new games and supporting the store as a whole.'

For us, it was sad. We new it was risky and we knew there was a chance—we weren't delusional or overly optimistic—we knew that there was a chance that this could happen. We did hope that they would try to stick it out a little longer because Rome wasn't built in a day. Steam wasn't built in a day. Steam, when it first launched, was very different from what it is now, and it's only because they kept at it and invested in that store that it grew to be what it is.

For Discord, I guess they saw the future that having a store and maintaining and up-keeping it would entail, and I guess it didn't fit right with them. They gave us and the other developers fair warning, but we do know that there were some developers who had literally put all their eggs in this basket and were really thrown for a loop. I don't know where all of them have ended up, but we all were communicating at that time and sort of leaning on each other for advice on how to pivot and what could be done.

These excerpts have been edited for length and clarity.