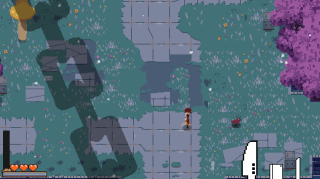 Ecila is an action game available for free over on Itch.io. Ecila is a game where you collect some weird knives and they have different powers. Ecila has some pretty good pixel art. Ecila is made by developers faxdoc and NostalgiaTree. Ecila has a very satisfying dash mechanic which I like quite a lot. Ecila is playable with a keyboard + mouse or a controller. Ecila took me about an hour and a half to beat, but will be shorter for you if you are better at action games. Ecila is also “Alice” backward, so there’s that.

So, in more detail: Ecila is a free action game that I quite enjoyed, because who doesn’t like a short free game? Nobody, that’s who. It’s an interestingly designed game about using your different weapons to their best effect, and the short length helps it stay fresh the whole time. I think it’s something that fans of games like Hyper Light Drifter or Dead Cells will be pretty excited to play. There are also cute little birds, which is good.

Ecila was made with Gamemaker studio. You can find Ecila on itch.io for free.