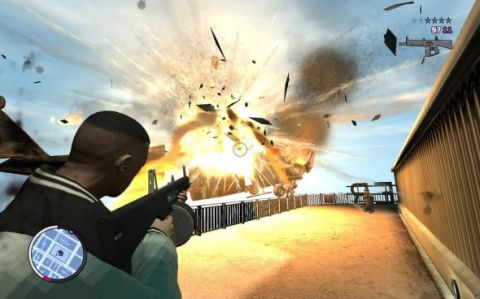 Better than GTA IV in every way, but the formula is beginning to feel tired. An adrenaline-fuelled elegy to Liberty City.

These Episodes - both The Lost and Damned and The Ballad of Gay Tony - are Grand Theft Auto served neat. The two tales are presented without mixer, without the dull filler that made GTA IV look more like an astounding technological achievement and less like a world you wanted to live in. Unlike the drugs almost every character in both of these stories snorts, smokes, or injects, EFLC 's ingredients are uncut: get a habit, and you're mainlining bike gang shootouts, helicopter-jackings and explosions at every juncture.

Fortunately, the game is all the better for it. GTA IV was po-faced, plonking you in the shabby shoes of a shabby man and making you live a shabby life. The protagonists in the Episodes ' are free from the drudgery of forging a new identity in Liberty City, and the obligation of wasting time with new friends. They're already set up with a supporting cast and an existing set of values, and as such are free to get stuck into the minutiae of the city. Our new heroes were born there, and they know it inside out without having to slowly unlock access to its three islands.

Rockstar have never had a problem with the technical side, and this Liberty City is as teeming with life as previous incarnations. Vehicles are a means to an end: the core of the game is the simple act of getting somewhere and having a cutscene tell you to go somewhere else, do something else, shoot someone else. But while the city is alive with human activity, it has a tendency to feel soulless. This was an issue with GTA IV that both episodes go some way to surmount by giving us two strong leading men.

[MPU]The Lost and Damned 's Johnny Klebitz is the sensible deputy commander of biker gang The Lost, but still embodies the kind of nihilism that enables GTA 's brand of pissabout mayhem. Luis Lopez, protagonist of The Ballad of Gay Tony, has a stint in jail to lend him an authoritative air. GTA IV 's Niko cameos, which helps tie the stories together, but also serves to highlight his relative drabness as a character.

Johnny is given licence to smash, taking deadbeats and posers out with the uncontained rage of a man expected to shoot police helicopters out of the sky with automatic shotguns on a daily basis. The motivation for joining a gang like The Lost - a tendency to see the outside world as a cruel joke - is particularly apt in Liberty City: a place where that assumption is entirely correct. Chucking The Lost's chapter boss Billy back into the city sets off a confrontation between Johnny's practicality and Billy's heroin-influenced thoughtprocesses. Johnny's worldview syncs up nicely with the jobs the player is given. As the missions get more and more deranged - the time I lured a police convoy through a petrol station purely to blow it up springs particularly to mind - his bewildered but bullish approach to life is easy to get behind.

TBOGT 's Luis Lopez operates from a different perspective. Saved from a life of small-fry drug-slinging by Tony Prince, Luis is a man conscious of his second chance. On first appearances, Lopez and Tony's world of nightclubs and celebrities has lost the scuzz and grime of Johnny's tale; but as the stories intersect and as Luis is lured back into less legal money-making methods, the shine comes off the legitimate lifestyle. As Tony's straight right-hand, Luis is fiercely protective, jumping to his defence: both against attackers and Tony's own self-destructive urges. These two characters are likeable, but it's the supporting cast that steal the show: Yusuf and Mori particularly. The first is the son of a billionaire oil baron, daddy's wallet erupting with cash; the second is the obnoxious orange brother of GTA IV 's Brucie, infinitely more irritating than that game's most irritating character. Missions from both of these idiots lend The Ballad of Gay Tony the happy inanity that sees GTA at its best, yielding gold-plated helicopters, dancing minigames, and most excitingly, parachutes designed for BASE jumping.

Gay Tony 's story finally has leave to cut loose, extending the action upwards and outwards. Almost every job involves taking to the skies in an assortment of helicopters, parachute strapped to your chest. Those that don't are ridiculous in other pleasing ways: I only realised I'd been holding my breath in giddy tension a minute into one of Mori's cross-city races, hopping between boats, bikes and sportscars to dodge traffic and beat the other playboy racers.

Tony's nightclub empire is on the slide, but both Yusuf and Mori are silly rich, handing you the keys to the game's best cars and most explosive helicopters and being told to go nuts. The best of Gay Tony is the best of GTA : one mission involves picking up an oddly accented celebrity blogger, whisking him into the skies on a helicopter 'tour' of the city, before dropping him over land. A simple show murder in previous games, but here, parachute strapped to his back, Luis takes after him. Sailing down toward terra firma with a gibbering mess of a man strapped to your chest, his soiled trousers set against a setting sun and the city behind him - it's the American dream.

Gay Tony 's missions go some way to clear the problems with GTA 's mechanics - that each story advancement is little more than glorified courier work: drive to here, take this there. The Lost and Damned relies less on high-flying antics, more on tight, focused missions and plenty of fireworks. I spent a lot of time on the lamb from the law, skidding Johnny's jean-clad knees around tight corners as I navigated away from the cops through LC's back alleys. Released on console between GTA IV proper and Gay Tony, it's a mid-way point between the two views of Liberty City, but works thanks to some useful tweaks.

Bikes have been tightened up, gripping the road and carving through traffic in a way that explains why a group of hairy men are so desperate to ride them all the time. Taking one of the game's pseudo- Harleys to a mission is a pleasure. Put up against one of Liberty City's more reliable four-wheelers, I found myself always plumping for the bike, the speed and manoeuvrability it offered out-driving boring cars, with the very real danger of being launched from my steed a thrill normal road vehicles lack.

Johnny's missions have been trimmed, too, excising the flab of lengthy story missions to deliver a hit of the quality stuff. Gunfights are common, but not protracted, finishing before they've outstayed their welcome, adding checkpoints to skip through tedious mini-scenes you've already aced. Klebitz's exit from the Libertonian museum after a diamond deal gone wrong is a quickfire shootout, giving the player enough of a flavour of fuckuppery to know that the deal's gone wrong without forcing you through endless blank rooms.

The problem is, despite the narrative and structural tightenings, trying to guide both Johnny and Luis through jobs that demand immediate reactions is made many orders of magnitude tougher through imprecise controls. GTA's basic walk is a swagger that looks good; but when it comes to avoiding gunfire, both Luis and Johnny are fussy about the cover they can and can't stick to. Every gunfight has the odd vision of a man pinned under hails of fire casually strutting between solid cover like something out of a '50s musical. Worse: sometimes I received phonecalls mid-mission, leading my character to stand bolt upright and pack away his gun. "Guys, can you stop shooting my exposed face for a second? I'm taking a call here."

Character has always been GTA's sticking point. While the games have relied too heavily on wink-wink film references and stereotypes to get the job done in the past, Episodes from Liberty City fills the sandbox with interesting people. Johnny isn't likeable, but he's believable; Tony and Luis have the spark of compassion usually missing on the city's streets. The Lost's story is meaner and leaner than anything yet seen, a focused dose of carnage. The Ballad of Gay Tony is sillier and more riotously colourful than any GTA since Vice City. Both burst out of the frame in a way GTA IV rarely managed, and both feel like the final word on Liberty City.

Better than GTA IV in every way, but the formula is beginning to feel tired. An adrenaline-fuelled elegy to Liberty City.