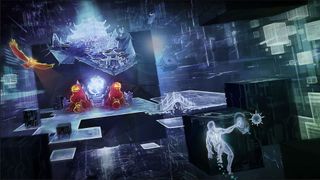 Few fictional genres possess such strong stylistic associations as cyberpunk. The word instantly conjures images of cities soaked in neon-lit rain, where glittering glass skyscrapers loom over squalid slums, where the lines between the organic and the synthetic have become blurred beyond recognition, and where virtual worlds are often just as real and just as dangerous as the physical one.

The strength of cyberpunk’s aesthetic makes games which adopt it easy to identify, but it also makes breaking away from that style a challenge. Here, we’d like to celebrate the different shades of cyberpunk gaming has conjured, delving into how these virtual visions of imagined futures reflect the themes their developers wanted to explore.

Shadowrun Returns blends cyberpunk with fantasy to create a world where orcs with prosthetic arms serve you drinks in underground dive taverns, while trenchcoat-wearing elves get into gunfights on the cracked streets of Seattle.

Here, you can see concept art from both the original game and its two expansions/sequels, Dragonfall and Hong Kong. Compared to Mankind Divided and Observer (overleaf ), Shadowrun offers a much broader sense of its own world, depicting how cultures differ and overlap across its various locations.

Much of Shadowrun’s concept is closely aligned with how the final game looks. Not only does it define the game’s cel-shaded aesthetic, it also shows us the perspective from which the game is played. See if you can spot the katana-wielding orc sneaking through the dockyards in the image below.

Featuring a sterling performance from the late, great Rutger Hauer, Observer is a sci-fi detective horror created by Bloober Team, the developer of Layers Of Fear. It sees players investigating a murder at an apartment block, hacking directly into the minds of witnesses and victims to solve the case.

Observer is more directly inspired by Blade Runner than any other game mentioned here. As well as featuring one of the movie’s actors, Observer’s crumbling apartment block strongly evokes the tenement Roy Batty chases Rick Deckard through in the film’s climax, where the high-tech society hasn’t fixed the dripping pipework and damp-ridden plasterboard that the city’s lower echelons call home.

Observer paints an aggressive and invasive vision of technology. Its cobalt-blue holographs spread through the apartment block like a virus, creating barriers that inhibit detective Dan Lazarski’s progress. Meanwhile, software in the minds Lazarksi hacks into construct virtual horrors that stalk him right back.

While it clearly owes a debt to the Deus Ex games that preceded it, particularly the sepia streets and skyscrapers of Human Revolution, Mankind Divided nonetheless takes its cyberpunk aesthetic in some interesting new directions. Set in Prague, it cleverly melds medieval architecture with the gaudy holograms and jagged metallic structures of its imagined future. At launch, Mankind Divided stood out particularly for its extreme attention to detail. It’s a world in which every desk and alley is cluttered with the detritus of life.

All the art seen here was drawn by Mathieu Latour-Duhaime, a veteran artist currently working at EA Motive. As well as doing general concepts, Duhaime also masterminded Mankind Divided’s eye-popping Golem City area, a sprawling slum-metropolis that provides a literal vision of an urban jungle. Electrical wires dangle everywhere like rainforest vines, and the yellowish strip lights give a sense of viewing the sun through a thick canopy of foliage.