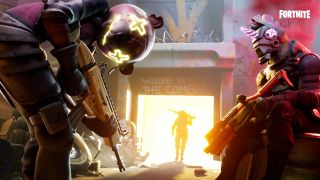 Fortnite's 10.40 patch is live now, introducing a new playlist, The Combine, where you can test your shooting skills—and the new aim assist and sensitivity settings if you use a controller—in a murder race, along with another Rift Zone. From Friday, your antics will also net you double XP.

The Combine was having some matchmaking issues earlier, but Epic says they've been resolved. There are still problems with stats not appearing on the leaderboards, however, but Epic is aware and looking into it.

Starry Suburbs is the new Rift Zone, bringing back the old neighbourhood just outside of Pleasant Park. It's been spruced up and seems to have attracted shooting stars that drop loot. This unfortunately means that the lovely suburb is now a war zone.

From 9am ET on Friday, you'll earn double XP for your matches, up until 9am on Monday. You might also notice other differences during your matches, too, thanks to the changes to matchmaking logic. You should find yourself being pitted against players of similar skill. It's being rolled out slowly while Epic analyses the impact, so it won't be live in every region straight away.