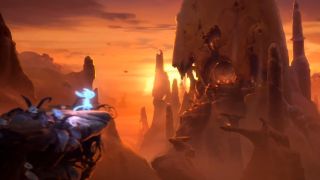 Beautiful platformer Ori and the Blind Forest remains one of the best metroidvania games on PC, and in 2017, developer Moon Studios teased a sequel called Ori and the Will of the Wisps. In interviews and trailers, the devs have talked about how the sequel differs from the first game—we’re told there will be improvements to combat—and at E3 2019 we finally got a concrete release date. We'll dive into all of those details below. Here's everything you need to know about Ori and the Will of the Wisps.

Ori and the Will of the Wisps release date

Ori and the Will of the Wisps has a release date of February 11, 2020. It will launch on the Xbox Game Pass for PC (and, presumably, the Microsoft Store).

A direct sequel to Ori and the Blind Forest, the brilliant, colourful, challenging metroidvania from 2015. Expect the same mix of precise platforming and exploration, and as you unlock new skills you'll backtrack through stunning side-scrolling scenery to reach previously inaccessible areas. Will of the Wisps puts far more emphasis on combat than the original—Ori has a new suite of weapons and abilities, including swords, bows and explosive projectiles.

Moon Studios is keeping a tight lid on the story for now. All we know is you'll "unravel Ori's destiny", and that you'll venture beyond the forest of Nibel—the titular setting of the original game. The devs have also repeatedly promised an emotional story, so keep a pack of tissues nearby.

The game's E3 trailer showcased some of the more monstrous enemies Ori will face, including a giant spider and a humongous fire-breathing grub.

Combat in Ori and the Blind Forest lacked variety: it was essentially one big button mash. Fights in Will of the Wisp will be much more deliberate. Moon Studios cite Dark Souls as an inspiration—not for its difficulty, but for the way you'll have to learn an enemy's attack patterns and exploit their weaknesses, rather than just wading in, sword waggling.

And, unlike in Blind Forest, you'll actually have a sword to waggle this time around, alongside other weapons. Ori has three slots for weapons and skills—assigned to three face buttons if you're using a controller—and you can swap them out at any time. They include a fast-swinging Spirit Sword, a powerful hammer, a bow, a slow powerful projectile and an explosive spirit bomb. Some non-combat skills fit into these slots too, which will let you customise your playstyle. You might swap out a weapon for a healing ability, for example.

“An influence behind this is actually Diablo,” Moon Studios CEO Thmas Mahler told the Daily Star. “A lot of us grew up playing Diablo, and it’s really cool to play as the Paladin or the Rogue and be able to go back and have different playstyles each time. Ori has replayability, we wanted to use that and let you think about your build every time you play."

There are more movement abilities, too

As well as being more lethal, Ori is more agile this time around. Double jumps and dashes return, but you also now have a grappling hook to swing through levels, as well as a "burrow" skill that lets you dive through sand, reaching areas beneath. If you burrow and then boost back out through the surface, you'll jump higher than usual, landing on hard-to-reach platforms. It also doubles as an attack that lets you damage enemies from below. You'll be able to use these abilities whenever you like after you find them.

You can upgrade all your abilities

You upgrade all combat and movement abilities as you progress—you can make your bow fire multiple projectiles rather than just one, for example. Abilities will have a number of different possible upgrades.

You can customise your character build by equipping "shards"

The devs have consistently highlighted the freedom Will of the Wisps gives players to tweak their loadouts. As well as swapping out skills and picking up new movement abilities, you'll find upgradeable "shards" hidden throughout the world that change how Ori behaves. One is a compass that points you towards the next objective; another grants you a triple jump. Some have trade-offs: one shard will boost your weapon damage, but reduce the number of hits you can take before you die.

You have four shard slots, and you can swap them out at any time. It's a flexible replacement for Ori and the Blind Forest's ability tree, which locked you into certain upgrade branches.

NPCs and side quests

Ori and the Blind Forest was a relatively lonely game, and Will of the Wisps will have far more NPCs. These characters will sell you goodies and hand out side quests, such as asking you to retrieve a particular item.

Some players found Ori and the Blind Forest too punishing, something Moon Studios is keen to address in Will of the Wisps. But rather than just making the game easier across the board, they'll instead let you escape tricky situations and return later.

Blind Forest locked you into certain areas, which meant you were stuck if you couldn't work out how to progress. In Will of the Wisps, you'll be able to back away from a sticky situation, setting off to explore a different part of the world. Once you've found some new abilities, or upgraded your current ones, you can return, and have a better chance of making it through.

Will of the Wisps is still a side-scroller, but there’s more depth than before

Ori and the Will of the Wisps looks even more gorgeous than the first game, and that's saying something. The art style is much the same—a lush colour palette and stylish bursts of light—but it looks more three-dimensional than before. Big enemies will stomp onto the screen from the background, and the team has built a new physics-based lighting engine to make the world feel more layered. It looks fantastic, if you ask us.

In certain locations, Ori will find Spirit Trials, which are new to the series. They're time trials where you must zoom, dash and grapple your way through a section of level as fast as you can. Your run is uploaded to the cloud, and you can view the "ghosts" of friends who have completed the trials, racing against them for the best time.

You can check out some footage of a Spirit Trial below.

Moon studios hired the creator of AM2R as a designer

Remember, AM2R? It was a fan remake of Metroid 2 that was shut down a few days after its 2016 release by Nintendo's legal department. Moon Studios were so impressed with the game that they asked the creator, Milton ‘DoctorM64’ Guasti, to work on Will of the Wisps. He's been a designer for the game since the summer of 2017.