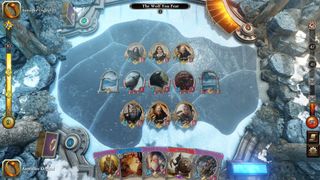 Fantasy Flight Interactive, a videogame studio launched in 2017 by board game company Fantasy Flight Games, will close its doors in February. Studio head Tim Gerritsen made the announcement in a message posted to LinkedIn, saying that he's now working to help his employees find new positions. The studio is located in Madison, Wisconsin.

"It's with great sadness that I have to report that the decision has been made to close Fantasy Flight Interactive next month. I'm proud of the team and the game we've dedicated ourselves to for the past few years," Gerritsen wrote.

"It's a been an amazing journey with even more amazing people. I'm going to do my best to get my team placed in new positions. I have programmers, designers, artists, QA staff and a producer to get placed in new roles and will do my best to do so quickly. Additionally, I'm now open to new opportunities myself since I will also be out of a job."

Fantasy Flight Interactive released its first and only game, The Lord of the Rings: Living Card Game, on Steam Early Access in August 2018. Full release, as The Lord of the Rings: Adventure Card Game, followed a year later, but despite its early promise it was never able to find an audience: It peaked at 226 concurrent players in September 2018, according to Steam Charts, but immediately declined into double-digit player counts. The full launch briefly pushed it back into low-100s, but its highest concurrent player count since September 2019 was just 86.

Update: Asmodee Digital said in a statement that despite Fantasy Flight Interactive's closure, The Lord of the Rings: Adventure Card Game will continue to be supported.

"We regret FFI’s closure which will be occurring next month and would like to thank the whole team for their hard work and the fruitful collaboration we have enjoyed these last years," a rep said.

"The Lord of the Rings: Adventure Card Game - Definitive Edition has been released in December 2019 on PC (Steam) and will be released early 2020 on consoles (PlayStation 4, Nintendo Switch and Xbox One). We will continue to support the game’s servers, including its co-op multiplayer mode, beyond FFI’s closure, ensuring an optimal experience for players venturing across Middle-earth."