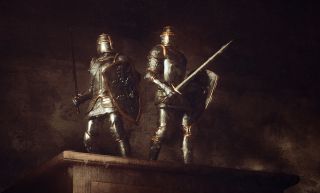 After more than seven years of tinkering away on Crusader Kings 2, its grand strategy RPG hybrid, Paradox has finally unveiled the sequel: Crusader Kings 3. There's a big map, of course, and loads of menus—what more could you want? Custom religions? Sure, there's that too. Crusader Kings 3 looks familiar, but Paradox says it wants to focus even more on characters and roleplaying.

Here's everything we know about Crusader Kings 3 from its recent reveal, including a rough idea of its release date and what it looks like from its first trailer.

When is the Crusader Kings 3 release date?

Paradox has been working on Crusader Kings 3 for around five years, but it's not ready to stamp it with a specific release date yet. It's in alpha at the moment and Paradox is still keeping a lot of features under its hat, but we do know it will launch in 2020.

Steady on, Paradox. Murdering kings and heirs is a lot more fun when it's all menus and crap character portraits. The trailer doesn't give much away, but grand strategy gameplay doesn't exactly translate very well to trailers anyway.

When is Crusader Kings 3 set?

Not surprisingly, this medieval ruler simulator is once again set in the medieval era, but that's a broad period and Crusader Kings 2 expanded it a couple of times through DLC. In Crusader Kings 3, you will be able to pick the Viking Age start, introduced in Old Gods, but it won't go as far back as 769, which we got with Charlemagne. The end date of 1453 isn't expected to change.

Probably! Game director Henrik Fåhraeus told us that the team was going deep rather than trying to match Crusader Kings 2's broadness—digging into the dynastic and RPG elements that made it popular—but most of its predecessor's features have made the jump over, in some form. The map covers the same area, you can play as a Muslim ruler or try to conquer India right from the start, vikings are back—you'll recognise a lot.

Things that haven't made the cut include the inventory system (which lead designer Alexander Oltner says was terrible for balance), merchant republics, and nomadic tribes. In the case of nomadic tribes, they still exist and you'll be able to play as them, it's just that they'll work like regular tribes.

Crusader Kings 3 is more of an RPG

Crusader Kings' hook is that that you're playing a character who's the head of a dynasty, rather than playing as a country or a faction. You have personal problems, relationships, moments of growth and crises of faith—it's an RPG nestled inside a strategy game. In Crusader Kings 3, Paradox isn't throwing the strategy out, but it is drawing out the roleplaying elements more.

You'll need to give your ruler a lifestyle focus, which will then give you access to three themed trees that let you flesh out your character through perks and events relating to that focus. If you want your ruler to be a burly warrior type, you work your way down the appropriate path, just like you might with an RPG class.

Dynasties can level up, too. You'll earn Renown points by expanding your dynasty and getting down to the business of being a medieval liege, which can then be spent on enhancing your dynasty, and all of its members. This way, you can build a warfare-focused dynasty to match your ruler, but there's also the risk that you'll also make your rivals within the dynasty stronger.

Personality traits will also guide your decisions more. If you make a decision that's contrary to your ruler's personality, they'll develop stress. The more stressed a character is, the more peculiar they start acting, and eventually they'll have a breakdown.

Dynasties are no longer big, homogeneous groups, and prominent members of your dynasty can split off and form a new house with their family. This new house is still part of the dynasty, but it gets a motto, heraldry and a bit more autonomy. The head of a house has additional ways to flex their muscles, and they can even become the head of a dynasty if they become powerful enough.

While Crusader Kings 3 will, like its predecessors, let you just set your own goals and has no strict victory conditions, one way to ensure success is by spreading your dynasty all over the place, inserting it into lots of realms. It sounds like the house system will let that happen more organically, introducing a bit more dynamism into dynasties while cutting out a bit of micromanagement.

Being a total asshole is a viable strategy in Crusader Kings 3. Instead of worrying about appeasing your vassals and argumentative family members, you can just use your terrifying presence to bend them to your will. By being a brute, you'll accumulate Dread, changing how characters react to you. Not brave characters, though, who won't be impressed at all.

As fun as this all sounds, it might make things harder for you down the line. If your ruler dies, their heir will inherit all the animosity but none of the fear, so you'll have a bunch of pissed off vassals to deal with.

Crusader Kings 3 will let you make a custom religion

Every religion in Crusader Kings 3 is made up of rules, traditions and opinions that give them flavour and unique mechanics, but if they don't tickle your fancy, you can just make your own. Be spending a big pile of Piety, you can split off and form your own faith, with the size of the bill increasing the further you get away from the original religion.

With your custom religion, you can pick the Doctrines and Tenets, representing the main focus on your faith and its opinions on subjects like homosexuality or who can be a priest. You can even make a custom leadership position, and you might want to take the top spot for yourself. How does being the pope of a cannibal cult sound?

Characters have escaped their tiny portraits

Instead of everyone in the world being represented by a little portrait of a startled homunculus, Crusader Kings 3's characters are expressive 3D models. They still look a little bit odd, but they've got more personality at least. When they're involved in events, you'll see them in a scene, looking smug or cowardly, and they're more prominent in the menus now, too.

A character's appearance is in part determined by their parents, with certain features, like hair colour, being passed on. Healthy, beauty and smarts can also be inherited. You can foster these traits in your heirs by picking a spouse with the traits you want to pass on—kings don't have time for love, they're too busy with their creepy breeding programmes.

Crusader Kings 3 will have knights

Your troops are split up into levies, raised by you and your vassals from the peasants who live in your realm, but you'll also be able to hire professional soldiers. Knights, however, are a cut above the rest. They've got better training and equipment and are ten times as powerful as a peasant.

Knights are drawn from your vassals and members of your court with a high Prowess level, making them excellent a personal combat. At first, you'll only be able to have a few knights, but eventually you'll be able to recruit more and better knights.

Use siege weapons to knock down pesky walls

Some provinces will be unfortified and easy to conquer, but others will be protected by castles or cities with thick walls; to take these provinces you'll be wanting to bring some siege weapons. Even the rubbish catapult you start with will speed up how quickly sieges go, and eventually you'll get access to more advanced bits of kit, like trebuchets.

How battles work in Crusader Kings 3

Terrain plays a greater role than it did in Crusader Kings 2. Armies can't cross rivers unless they find a suitable place to ford, at which point they are vulnerable to attack, and there's more impassable terrain and features like bottlenecks that offer a tactical advantage. The terrain also determines how many troops you can fling into the fight. If it's on a mountain, you won't be fielding the kind of force you could use on an open field.

When armies collide, the game determines who gets the Advantage bonus. Everything from terrain to the traits of the army's commander contributes towards the Advantage modifier, and the side with the highest number gets a combat bonus. Battles last days rather than hours, though, and there will be other chances to win or lose the bonus.

The map is massive

Crusader Kings 3's map covers everything its predecessor did, including the DLC, but it takes up a lot more space. A lot of things that used to be hidden away in menus, like baronies or churches, are now physically displayed on the map, and everything's been scaled up.

The map's also just a lot prettier. Instead of just trees and towns and the occasional mountain range, it's closer to something like Civilization in terms of detail, though a bit more grounded. We've only seen Britain up close, but it looks like a serious makeover, and a bit of an upgrade over the already very handsome Imperator: Rome.

Check out our preview or pick up the next issue of PC Gamer magazine for more details. Paradox still hasn't shared much about warfare or the economy, but we'll be updating this when it does.