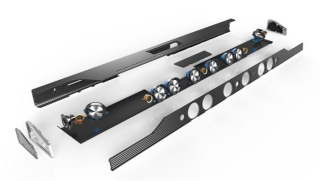 You've probably used a Sound Blaster card in your rig at some point. These days, a lot of folks are likely using just the onboard sound on the motherboard. Onboard audio has improved greatly in the last couple of years, but the main component to make it all sound good squarely rests on the type of speakers you're using.

Creative has a solution: the X-Fi Sonic Carrier. Although it doesn't want us calling it a "sound bar," it is essentially that, but perhaps only in shape. The Sonic Carrier is a lot more than just a sound bar, and we had the chance to listen to it today at CES.

The team at Creative tells us that it's thrown all its audio experience into this product. You've got quality drivers, tons of processing power, DSP-controlled sound, multiple connectivity, an upgraded EAX system, and for the first time in a Creative product, Dolby Atmos.

What is Dolby Atmos? Simply put, a system that allows elevation imaging. It means you'll be able to hear a helicopter hovering above your head, and perceive how high it might be. We asked Creative if the Sonic Carrier utilized all of the Aureal 3D technology the company purchased long ago, and the answer is that A3D is used in full force here (combined with EAX). You'd be forgiven if you've never heard of A3D—it was a technology that produced real 3D audio from two speakers.

The Sonic Carrier pushes audio through 11 front and side, individually controlled channels. There are also four upward-facing channels. The drivers are all DSP-controlled through seven custom audio processors totaling 14 cores. There are some serious pressure pushers in the Carrier.

Inputs? It's got lots:

The Carrier also ships with one subwoofer containing two opposing drivers, each individually powered by a 250W RMS amp.

So, how does it sound? In a word, impressive. We were able to listen to the Sonic Carrier in a closed room environment, and several demos were played. Everything from classical concerts to Avatar was demoed. Truth be told, the volume was turned up to compensate for some CES ground noise, so we'll have to reserve full judgement for a controlled environment. However, Dolby Atmos performed relatively well, and we were able to hear transients and other effects from different positions around our head.

Creative is positioning the Sonic Carrier as a true home theater system that can replace multiple speakers. We reckon this might be a good setup for some, but not serious home theater enthusiasts. Where things become interesting is the possibility of using it as your primary PC speaker system. You'll need space if you do that though, because the Sonic Carrier stretches 55.1 inches.

The final product won't ship until much later in 2016, and Creative says it has a few things to add to the Sonic Carrier, but once it does, it'll cost $5,000. If this sounds like too much to you, we understand. Most people don't even spend half that on their PC. However, Creative is taking a sort of Kickstarter approach, allowing pre-orders right now at a price of $1,750. That price will continue to increase as it passes certain order milestones.

Creative says the Sonic Carrier is its most ambitions project, and we can see why. We'll wait until we get our hands on one hear why.

Tuan is the Editor-in-Chief of Maximum PC, and loves all things tech. He's been building PCs and ruffling feathers in the industry for 20 years, and isn't afraid to call out bad products and services. In fact, it's very common to hear the words "this is shit" escape his lips. If you want to know if something is "Kick-Ass" or not, email or tweet him.
See comments