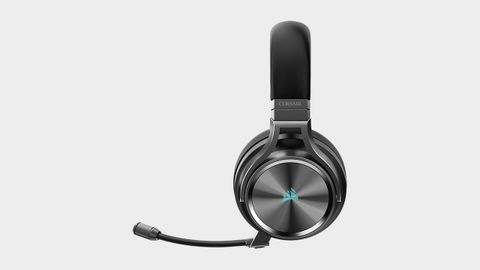 The Virtuoso might be the best looking wireless gaming headset out there. Corsair's attention to detail makes these fancy cans tough to pass up.

Corsair has always made decent, subdued headsets that never quite turned heads. The HS 35 and HS70 are fine headsets but clearly Corsair wanted to make a statement with the release of the Virtuoso RGB Wireless SE.

I can't remember the last time I didn't feel like I looked like a complete doofus while wearing a gaming headset, but the design of the Virtuoso is second to none. From the polished gunmetal finish to the tasteful use of RGB lighting on the Corsair logo, nothing was overlooked. I never would have thought I would say the phrase "tasteful use of RGB" at any point in my adult life, but here we are.

Even though $209.99 isn't cheap, the Virtuoso RGB makes you feel like you're wearing a more expensive set of cans. It feels almost like a statement from Corsair that gaming headsets don't need to look silly or need to scream 'Yo, I'm a gamer.'

The level of craftsmanship on the Virtuoso rivals even some gaming headsets in the $250-$300 price range. I mean come on, you even get a really nice travel pouch with magnetic clasps to keep all your Corsair-branded braided cables in one place. The memory foam ear cuffs and lightweight build means I was able to comfortably wear the headset all day. This is usually a problem since I can really only go a few hours without giving the sides of my head some rest.

I was impressed with the Virtuoso's 7.1 Surround Sound performance, particularly in first-person shooters. In the Call of Duty Modern Warfare beta, I was able to easily discern everything happening around me on the battlefield and still be aware of approaching footsteps or clearly hear teammate chatter that otherwise would get muffled underneath the sounds of helicopter blades and drone strikes.

I used Corsair's iCUE software to mess with the RGB settings and EQ presets. It is mostly serviceable, though I do wish I was able to go a bit deeper in the EQ settings. Importantly, I was able to set the lighting of the logo to a ridiculous pulsating red and gold, my high school color, obviously. Let's go Bruins.

Listening to music on Spotify, the bass felt a bit on the weaker side, and despite EQ presets such as Bass Boost, it still didn't feel right. Even with adjustments, vocals always seemed to overpower everything, which is a bit of a let down if you're big into rap or bass-heavy rock. Listening to Money In the Grave by Rick Ross, for example, the bass felt almost nonexistent. If you prefer more vocal-heavy tracks, the Virtuoso sounds great. I had no problems when blasting some acoustic songs like Foo Fighters' Everlong or Thirsty Merc's Build a Bridge.

It's a shame because I love the look of the Virtuosos so much that I want them to be my everything headphones, and not have them regulated to just gaming and chatting on Discord. The music still sounds good, don't get me wrong, it just lacks the oomph I prefer when jamming out.

Speaking of chatting, the detachable mic also deserves some props. Its design, keeping with the theme of the Virtuoso, is well done. Crystal clear sound, flexible, and the mute button is located at the base for easy access. The mic input is also notched so you don't accidentally put it in backward. It's just a minor thing, but Corsair spared no expense nailing these little details. I played some Horde Mode in Gears 5, and I was told numerous times how loud and clear and I came through—something I really don't hear often when testing wireless gaming headsets.

Corsair claims an average 20-hour battery life on the Virtuoso, which seems pretty accurate when I ran it down to zero a couple of times during testing, and it charges relatively fast with the packed-in braided USB-C charge cable. To help manage power, the headset uses an accelerometer to power down automatically as soon as you take it off.

The Virtuoso is a beautifully designed headset, with rich sound range, long battery life and one of the best microphones out there. I do wish the bass was better when listening to music, but that's honestly the only negative I have to say about a headset that I otherwise loved. If you're a gamer looking for a grown-up headset that actually makes you want to be seen wearing it, the Virtuoso is a great choice.

The Virtuoso might be the best looking wireless gaming headset out there. Corsair's attention to detail makes these fancy cans tough to pass up.