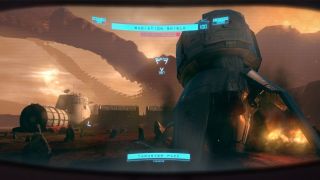 Corpse of Discovery was announced in July with an intriguing premise and a strangely creepy teaser. It's a loose sci-fi twist on the Corps of Discovery that existed briefly in the early 1800s, but instead of sending intrepid explorers into the American West, it sends them into deep space. The developer, Phosphor Games, didn't reveal a release date but said in the announcement that it was "coming soon," and they weren't kidding, because it's out now.

The launch trailer is similar to the teaser but reveals a little more about some of the pressures you'll face as a deep-space explorer torn between supporting his family and returning to them. And of course, what was supposed to be a routine job turns out to be anything but. "You wake up on a base in a new, unexplored planet. Your landing craft is torn to pieces and your gear is scattered," the Steam description states. "Why are you here? What is your mission? How will you ever get back home to your family?"

The game was actually released on the 25th, but the release didn't go live quite when it was supposed to and so I ended up putting this off, and then forgetting about it, until now. Sorry about that. The good news, for those interested, is that the launch promotion price of $13/£10 is still in place, and will remain so until September 1.