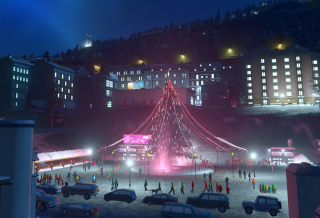 Cities: Skylines keeps on sprawling. Following a cryptic teaser posted to Reddit by Paradox staff, the Snowfall expansion has now been announced, arriving "later this year".

Snowfall at last brings weather systems to Skylines. Cosmetic rain and fog will be released as a free update and appear on existing maps to make your citizens' lives that little bit less pleasant.

There's no word on price yet, but the After Dark expansion costs $15/£11, so I'd expect something similar.