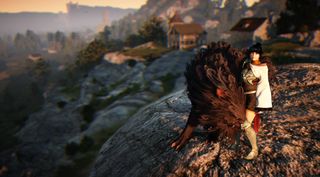 The upcoming fantasy MMO Black Desert Online is now taking registrations for its first closed beta, which will run from December 16 to December 22. The beta promises a number of improvements over the alpha test that wrapped up last month, including greater character customization options, improved class balance, and better weather cycles.

Black Desert Online is an open-world action MMORPG that promises "the deepest character customization of any game currently on the market." It features "intuitive skill-based combat," with six character classes—Warrior, Ranger, Sorceress, Berserker, Valkyrie, and Wizard/Witch—with their own unique skills and powers. It will be sold "as a premium service, not a subscription model," with purchase prices ranging from $30/€30 to $100/€100.