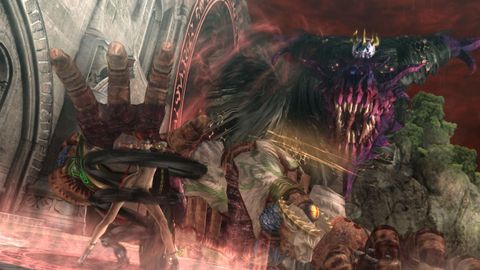 A great port of what is still one of the best action games around. Bayonetta is the essential hack-'n-slash.

It took nearly eight years, but Bayonetta is finally on PC. Despite originally releasing on Xbox 360 and PS3 in 2009, this is no mere historical curio. Bayonetta is still one of the best—maybe even the best—hack-'n-slash action game around. And this PC version is now the best version you can buy, offering 4K support, and smooth, stable framerates. This is how you port a classic.

Summing up the plot seems futile, because Bayonetta is about a witch with guns strapped to her stiletto heels who can eat angels with her hair. Things only escalate from there. The world offers a sprawling backstory and detailed lore, but the main plot focuses on Bayonetta, her relationships, and her amnesia, which leaves her with only flashes of her life before she awoke at the bottom of a lake some 20 years before the events of the game. The important things to know are that you're in the fictional European city of Vigrid, you're searching for a mystical macguffin, and that you're about to kill a lot of angels.

Combat is Bayonetta's raison d'être—both the character and the game. Lucky, then, that it offers one of the best combat systems around. You have a basic punch and kick attack, and they're used to execute any of a myriad of possible combos based on the weapon you have equipped. Certain combos can be capped off with a powerful finisher, called a Wicked Weave. Executed by holding down either punch or kick, these use Bayonetta's hair (which is also her clothes) to summon a demonic fist or boot to slam into your foe. The damage this inflicts depends on the combo, and so it's a great system for punctuating a well executed set of moves. The timing of a Wicked Weave—a short beat removed from the combo proper—creates a distinct, hypnotic rhythm to Bayonetta's fights.

Executing combos is fun in and of itself, but it's the additional systems that make Bayonetta's combat so good. The dodge is a masterpiece. By tapping the right-trigger on a control pad, (or the shift key if you fancy your chances with mouse and keyboard,) Bayonetta evades the current attack. Dodge at the last possible second and you'll enter Witch Time, which briefly freezes everyone—save for Bayonetta herself—in place. It's a small window in which to let loose, and break out a big combo without fear of counterattack.

Witch Time encourages you to stay in the fight, and learn the timing of each enemy's attack. This is a challenge—there are many different types of angel—but the sound design offers a helping hand. Take, for instance, the shimmering slice of an Affinity's staff attack. As the most basic enemy type, you'll hear this soft, subtle noise throughout—maybe even without noticing. But its specific modulation helps reinforce the timing of the swing, giving you an intuitive sense of the best moment to dodge.

At the most reductive level, Bayonetta is about combos and dodges—just like any game of this type, from DmC to Nier. But here, everything fits together so organically. Nier: Automata, to me, is about precision. Bayonetta is about flow. In part, this is thanks to an advanced combat trick that brings everything full circle. If you dodge in the middle of a combo while holding down either punch or kick, you can resume the combo out of the dodge. This offset speaks to the fluidity of Bayonetta's fighting style—as does the way she so smoothly transitions from dodge into attack, or from melee to guns.

Each battle sequence is graded, based on the quality of your combos, and time and damage taken. But such a breakdown feels almost unnecessary, because a perfect encounter is itself a reward. The style and fluidity of the attack chains is astonishing. Ultimately, Platinum has put in the work to create combat systems that feel great, but that also interlock into something more than the sum of the parts. That is reason enough to want to do well.

When you're in the flow, the combat feels like an extension of Bayonetta's character—and not just because she has a spank attack she can use on stunned enemies. There's a grace to her animations, and, as long as you're not taking damage, she looks poised and in charge during every frame. As a protagonist, she's not just cocky and unflappable, but looks like she's having fun throughout.

This is taken up a notch during action cutscenes—beautifully choreographed sequences that are in equal measures cool, silly and playful. Bayonetta frequently breaks the fourth wall, not in dialogue, but with frequent knowing glances and poses to the camera—usually as it lingers appreciatively over her body. In a less self aware, self assured game, the camera's obsession with Bayonetta's ass and boobs would seem egregious. Some would (and do) argue that it's bad here, too. But it always feels that Bayonetta is in control. The camera is an extension of her personality, and its placement is consistent with her use of sexualisation as a source of power. It's telling that during the more serious character moments, the camera backs off respectfully.

Everything about Bayonetta—from how she fights, to her dismissive, jokey tone—exudes confidence and competence. She's a great protagonist for this type of game, because as you're still marvelling at the size and design of an Auditio—Paradiso's Cardinal Virtues, and the main bosses of the game—she's cracking wise about their upcoming encounter. And then you beat them, and Bayonetta triggers a ridiculous Climax finisher, in which her hair (and thus her clothes) transforms into a giant demonic monster that smashes, pecks and otherwise devours your foe. The sense of spectacle keeps building throughout, leading to a final sequence that is audaciously absurd.

Most chapters are simply a series of fights along a journey from one end of the level to another. But throughout, Bayonetta breaks the format with special sequences—fighting on speeding vehicles, riding a motorbike across a seemingly endless highway, downing missiles in a competent (albeit slightly shonky) shoot-'em-up section. There's the occasional QTE or instant death scenario, which does feel like an unwelcome relic of the era Bayonetta was made, but they become fewer in number the further you get through the game. Slightly more annoying is a tendency to transition out of a cutscene directly into an enemy attack. Unless you're prepared, it means taking damage in the first second of a fight—instantly sacrificing your chance of a Pure Platinum rating.

Mostly, variety comes from enemy types and environment design. While Vigrid itself feels a somewhat bland as an environment, other locations—most notably Paradiso—look great, despite the ageing graphics. And each environment is filled with secrets, from books that flesh out the world's lore, to Alfheim portals that teleport you to an arena for a specific combat challenge. These portals lead to some of the toughest fights, not so much because of the enemies themselves, but because the victory conditions require a high degree of proficiency in the minutia of combat.

Some Alfheim challenges simply won't be possible the first time you encounter them. But Bayonetta's chapters are designed to be replayed. Rather than a New Game Plus mode, you can revisit and replay previous chapters at any point, either to increase your ranking, or farm for items and halo rings—used to buy new techniques and accessories. There's plenty of reason to replay as you build towards a fearsome arsenal of weapons, increasing your combat viability for the higher difficulties.

The PC version performed perfectly in my tests on two systems. Both the GTX 1070 and R9 Fury X held steady at 1440p. There are a couple of quirks to the port, though, most noticeably that the action is locked at 60 frames per second, and the cutscenes at 30 fps. In addition, the anti-aliasing setting doesn't seem to do anything. There's also no ultra widescreen support, although I'd argue that's forgivable in a pre-2010 action game. Mostly this is a great port, with plenty of PC specific customisation options, including the ability to rebind keyboard controls (although, unfortunately, not control pad buttons,) and a plethora of graphics options that do work.

The real prize is the ability to play Bayonetta at modern resolutions, at a stable frame rate. The Xbox 360 version of the original release struggled to keep a steady 60 fps during frantic, effects-laden action scenes, and the PS3 version was hot garbage. The grace and fluidity of combat requires stability, and this PC version is the one that delivers. It's the best way to play one of the best games of the last decade. Yes, Bayonetta has aged in places—some systems and story beats feel like a relic from a bygone era. But it's never anything less than entertaining, and, thanks to an exceptional, best in class combat system, it's frequently an absolute joy.

A great port of what is still one of the best action games around. Bayonetta is the essential hack-'n-slash.