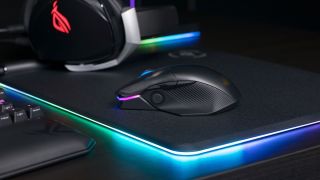 If you are in the hunt for the best gaming mouse, you might not have considered a model with a built-in joystick, though not necessarily from lack of interest—it's a rather sparse field. It also just got a little big bigger with the introduction of the Asus ROG Chakram.

Our first impression of a mouse with a built-in joystick came by way of the Lexip PU94, and thankfully the production model we reviewed improved upon the initial design. I'm curious to see how the Chakram compares, but that will have to wait for another day.

In the meantime, Asus has provided a rundown of the specs and features of the Chakram. It's a wireless rodent with support for the Qi standard. On the wireless side, you can connect it via RF (2.4GHz), or Bluetooth in a pinch (I would expect higher latency over Bluetooth, and Asus the joystick won't work over Bluetooth).  If you're a 'wired or die' kind of person, there's a bundled USB cable to go that route.

The built-in joystick is the primary attraction, and I'll go over that in a moment, but it's not the only interesting feature on this Chakram. The left and right clickers both use Omron switches, and you can access them for easy replacement by popping off the magnetic cover and buttons. No screwdriver is needed. Same goes for installing new switches, should you ever need to. They're configured by way of an "exclusive push-fit switch socket."

"It take just a moment to swap the switches, making it easy to drop in ones that fit your preferred operating force and feedback—or replace worn or broken switches to extend ROG Chakram's lifespan," Asus says.

The optical sensor is adjustable from 100-16,000 dpi. Other specs include 40g max acceleration and 400 IPS max speed.

Okay, back to the joystick. This works in both analog and digital mode. In analog mode, it's supposed to function like an actual joystick or thumbstick, as found on pretty much any modern controller. Asus says this mode is "ideal for flight sims and racing games."

In digital mode, which Asus recommends for first person shooters and battle royale games, it becomes a four-way programmable joystick (up, down, forward, and back). So, it sounds like there is a fair bit of versatility there.

Rather than take a one-size-fits-all approach, Asus includes both a longer and shorter joystick to pop on and off the nub embedded in the side. There's also a socket cover if you've rather ditch the joystick altogether for a flush finish.

It sounds like an interesting entry in the gaming mouse space, albeit a pricey one. After showing off the Chakram at Gamescom last year, Asus says it will be available this month for ~$150.